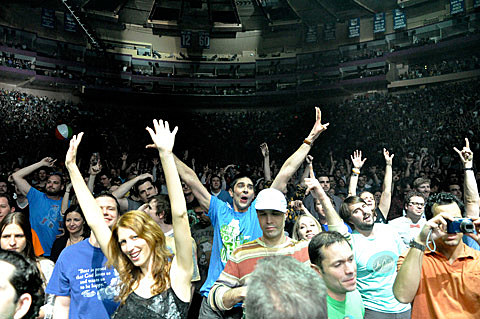 I can think of literally thousands (millions?) of things that I'd rather do around New Year's Eve than go to a Phish show. Get kicked in the teeth by a burro. Fall down some stairs. Murdered. But obviously some people (and there are a lot of people) still care deeply for the Vermont jam band that spawned acres (or is it ache-rs?) of followers, drum circles, hackey sack games, etc.

Today is your lucky day. Phish has announced that they will play Madison Square Garden over four nights including New Years Eve, 12/28 - 12/31. Tickets aren't on sale yet, but you can request them via the band until Monday, October 24 at 11:59 AM. Check ticketmaster after that for general sale.

All tour dates are below, along with some video including one of Phish & Jay-Z covering Big Pimpin' and 99 Problems. I can now die complete.