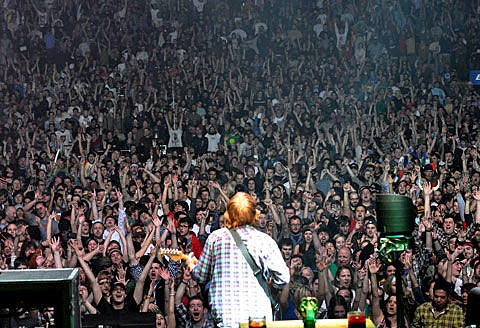 NYC hippies have all the luck:

"It's not the ball drop, but for tens of thousands of people, Phish's annual run of shows at Madison Square Garden...is the more significant year-end event in Manhattan," The New York Times' Jon Pareles observed. Reviewing Phish's 2011 New Year's Eve concert, American Songwriter noted: "[the] night saw the band going for broke...Balloons rained from the ceiling, and Trey Anastasio and Mike Gordon levitated above the stage on platforms, and several dancers took to the air on wires..."

An online ticket request period is currently underway at http://tickets.phish.com. Tickets will go on sale to the general public beginning Saturday, October 20, at Noon ET at http://www.ticketmaster.com or can be charged by phone at 866.858.0008. If tickets are still available, they may be purchased at the venue box office beginning Monday, October 22. Box office hours are Monday-Saturday, 9 AM - 6 PM. Tickets may also be purchased at select Ticketmaster outlets. For further details, visit http://phish.com.

Ticket prices for each specific date will include a free MP3 download of the evening's entire show (a fully mixed soundboard recording) that can be redeemed at www.LivePhish.com shortly after the band steps off stage.

Other NYC New Year's Eve options include Amanda Palmer and The Felice Brothers.