"I woke up this morning and thought the whole MSG run was a dream." - @SoYeahBrah 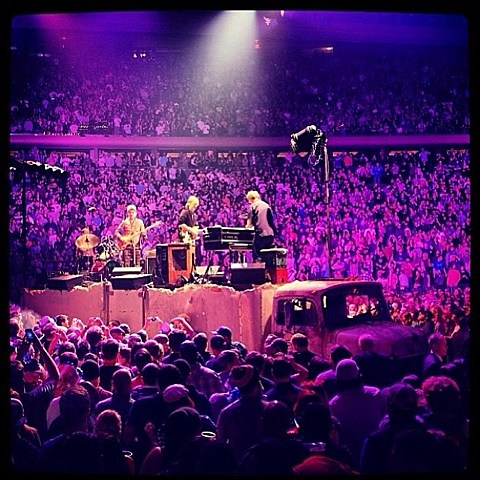 2013 marked 30 years since Phish first formed on the campus of the University of Vermont in Burlington, VT. Keyboardist Page McConnell mentioned the occasion on New Year's Eve 2012-2013 and then there was little talk of the anniversary throughout the year...until last night. The quartet finally celebrated their anniversary last night at Madison Square Garden as part of their New Year's Run finale at the NYC venue. The members of the band loaded on top of a truck made to simulate a stage of a club from early in their career for Tuesday night's second set. Phish also tipped their hats to the band's first gig by using hockey sticks as microphone stands and an extremely basic gear setup. Furthermore, in between the end of the third set and the encore, a montage showing scenes from the past 30 years was displayed on The Garden's scoreboard. With the exception of the "Auld Lang Syne" that signaled the start of 2014, Phish didn't play any covers throughout the four night run. [JamBase]

Phish played their four-night run at Madison Square Garden starting on December 28 and leading up to New Year's Eve. Like the review quoted above mentions, they only played one cover over the course of the four nights, which were in celebration of their 30th anniversary as a band. You can check out the setlists from all four nights below.

In less happy news, like at Phish's recent Halloween run in Atlantic City, more than a few people were arrested outside of MSG on the nights of the shows. NY Times reports:

At least 228 people were arrested or received summonses at shows on the first three nights of a four-night stand that was to end Tuesday with a New Year's Eve performance and undoubtedly more arrests.

While ticket scalping and public urination accounted for some of the arrests over the first two days, most were linked to narcotics possession and sales. Undercover officers have confiscated marijuana, hash, psychedelic mushrooms, LSD, MDMA or ecstasy, amphetamine and prescription drugs like Oxycodone, OxyContin and Xanax, among other drugs, the authorities said.

Most of the offenders were charged with misdemeanors or given summonses, according to the Manhattan district attorney's office. So far, 10 people have been charged with felonies, most of them for attempting to sell drugs to undercover police officers.

The article also points out that Phish fans were handing out a pamphlet which included, among other things, a plea for Phish to play New Year's Eve in a different venue:

"How about visiting some other great Northeast venues?" the pamphlet said. "You know the ones that have affordable accommodations, easy transportation, and where Our Community is thoroughly welcomed by the Local Community?"

Setlists from all four nights below...

Phish at MSG - 12/28/13 Setlist: (via)
Set 1:
The Wedge
Stealing Time From the Faulty Plan
Mound
Axilla I
Birds of a Feather
Wolfman's Brother
Monica
Seven Below
Tube
Free
Julius

Set 2:
Sand
Piper
Back on the Train
Tweezer
Backwards Down the Number Line
Steam
Silent in the Morning
Waiting All Night
Run Like an Antelope

Encore:
Slave to the Traffic Light