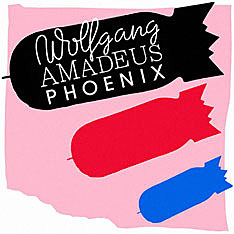 ...While starting to make Wolfgang Amadeus Phoenix, however, perfection eluded them, as the band - comprised of Thomas Mars (vocals), Laurent "Branco" Brancowitz (guitars), Christian Mazzalai (guitars) and Deck D'Arcy (keyboards/bass) - seemed initially unable to find an environment to provide them with sufficient inspiration. After a triumphant worldwide tour behind It's Never Been Like That, Phoenix came back to Paris and tried to figure out where to go next - literally. From attempting to work on a houseboat in the River Seine, to camping out at New York City's Bowery Hotel, to eventually retreating to the Montmartre house of friend Philippe Zdar of Cassius to record in his studio, the band constantly challenged themselves to write the album they knew they had in them, but couldn't seem to find, no matter where they went. With Zdar, who co-produced the album (a first for the band, who previously worked with little help from others, hence the undisturbed precision of Phoenix's universe), they focused on the idea of greatness, determined to create something that would be exciting not only to their rabid fanbase, but to themselves. And thus, after a solid year and a half of tedious reworkings and endless going-back-to-the-starts, the record clicked. Wolfgang Amadeus Phoenix, a tongue-in-cheek title meditating on the idea of "classic and upstart," was born."

Phoenix will be playing select American shows this summer. Details on these shows will be announced soon. [press release]

Phoenix are the musical guest on Saturday Night Live on April 4th (tonight is Jonas BrotherS). Grab a track off the new album HERE. Full tracklist below...