Phosphorescent at Outside Lands 2014 (more by Samantha Saturday) 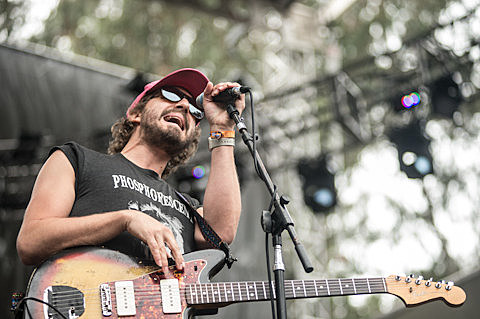 Earlier this year, we mentioned that Francesco Ferorelli's Brooklyn-based folk rock band Heaven's Jail released an album produced by and featuring Phosphorescent main man Matthew Houck. Now Matthew and Francesco have announced that they'll make their first live appearance as a duo at the first of Wesley Stace's three upcoming Cabinet of Wonders shows at City Winery. They'll be at the one happening on September 19, and other guests were announced as well including guitar great Marc Ribot, Memphis walker Marc Cohn, folk/jazz singer Jill Barber, novelist Charles Bock, essayist Megan Stielstra, and Eric Bazilian of '80s-era pop rockers The Hooters. Tickets for that show are still available. You can also get tickets to the upcoming Cabinet of Wonders shows on 10/24 and 11/21 (guests TBA).

The show's being recorded for NPR and will be available as an archive afterwards. Other past Cabinet of Wonders have been archived as NPR podcasts too. You can listen to a few, like the one featuring Craig Finn, John Darnielle, Hamilton Leithauser and more or the one featuring Ted Leo, Eugene Mirman, Sean Nelson and more, here.

Heaven's Jail recently made a video for "Long Island Sound" off his album and performed that same song in a studio for Bedford & Bowery. Watch both of those videos below...