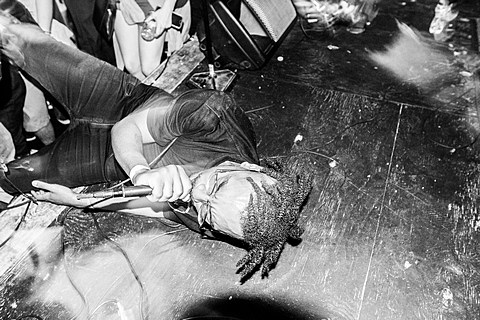 Rap weirdo Cities Aviv has a new single out, "Neutralizer" / "Graced and Blessed," on which he continues to push the genre's boundaries. Even in a world with Yeezus and Death Grips, this is pretty out-there stuff -- experimental electronic music (WGM produced) takes the place of anything you'd traditionally call a "hip hop beat" and Cities' delivery is raw, unique, and doesn't succumb to any major rap trends, past or present. Listen below.

Cities Aviv has two very cool and very different NYC shows coming up. The first is a Palisades show on May 2 with hardcore band Sick Feeling (no strangers to shows with rappers) and Show Me the Body. That's a late show, starting at midnight, and tickets are on sale.

Later that month, he plays a much bigger show at Webster Hall on May 23 which is the Boysnoize Records 10th anniversary and stacked with electronic artists, including label head Boys Noize, Ed Banger vet Mr. Oizo, Boys Noize & Mr. Oizo's collaborative project Handbraekes, LA's Salva, Baltimore party-starter Spank Rock, producer and Beyonce/Diplo video director Lil Internet, and SCNTST b2b Pilo. Tickets for that one are on sale now too.

Boys Noize also has a ton of other tour dates, which are listed, along with the new Cities Aviv single and a Handbraekes song, below...