outside of the Living Room (more by Amanda Hatfield) 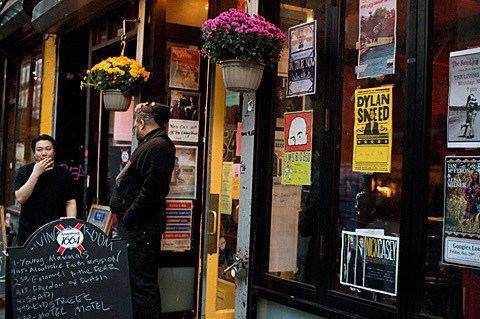 At the end of January, The Living Room will be closing the doors at its 154 Ludlow St location (right next door to Pianos and Cake Shop), where they've been for the past ten years since moving from their original Stanton St location. In a press release, owners Jennifer GIlson and Steve Rosenthal mention that higher rent costs have made it too difficult to keep the Ludlow St location, but they're promising to move to a new space, and are asking for your help to fund the move and construction. To help out, you can donate to their PledgeMusic campaign.

In terms of the current location, LES blog The Lo-Down reports that their neighbors Pianos have filed documents with Community Board 3 to take over the space. What they'll do with it is unclear, though the documents mention the possibility of "live/world music similar to the current method of operation." Time will tell. CB3's SLA Committee will be considering the proposal on January 7 at 6:30 PM at the JASA/Green building (200 E 5th St).

In a Columbia University student publication, Living Room co-founder Jennifer GIlson was interviewed about the damages done during Hurricane Sandy and mentioned that they lost at least $15,000 and were applying to the LES Business Improvement District for a small grant. As The Lo-Down article points out, the ownership change was probably in process before Hurricane Sandy though.

Meanwhile check Living Room's calendar for their list of upcoming shows at the current location. They'll have a few bands and karaoke at midnight at New Year's Eve.