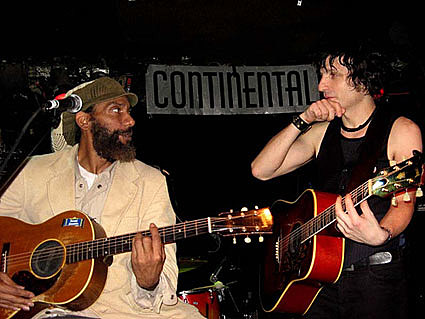 The above photo is HR of Bad Brains playing with Jesse Malin at the Continental's 4th-to-last show ever (Thursday, September 14th, 2006). Jesse came back on Friday the 15th to play with Trigger too. Carla wrote in...

the show Friday was great. it was fucking packed! we were there till close to the end- we missed the last band. It was pretty cool because there's this whole crew of rock bands (Drag Citizen, Honor Among Thieves, Banana Fish Zero, Joker Five Speed, Slunt, the Sex Slaves) that used to play together all the time at the Continental, Rock Candy at Don Hills, Trash, etc. and it was really nice for a lot of them to get together at the Continental one last time. There's still really a cool community of hard rockers in this town-- pretty much under the radar, but it's still going on. Trigger played with a bunch of guys form the bar (Bingo the door guy on bass and this dude Joe) and Jesse Malin. They were great. Appropriately, they played I Wanna be sedated and Blitzkrieg Bop. I took some pictures that didn't come out because someone was throwing beer in the crowd. It was dirty, loud, and smelly-- the de rigueur Continental experience.

HR will be rejoining Bad Brains for two CBGB gigs in October. Jesse Malin is playing two shows at the Living Room during CMJ.