“Sincerely, L. Cohen: A Celebration of Leonard Cohen” could have been a somber affair. But all performers took the “celebration” part to heart, infusing even Cohen’s most somber truths with equal parts reverence and reverie. Co-produced by two big Cohen fans, music producer Jesse Lauter and City Winery’s head talent booker Hannah Gold, the evening found a mix of New York icons and esteemed singer-songwriters alongside cult performers and up and comers for a night of Cohen standards, stories and deep cuts.

“I felt like putting on this show was a moral obligation to my Hebrew School teachers and my childhood rabbis,” Lauter told me with a laugh. “There’s a deep tribal sense. So Hannah and I felt like we wanted to take it on, we felt like it was owed to people. We wanted to make sure we did it at an appropriate time. We saw people throw together things shortly afterward, which was great, but we wanted to pay a lot of care and attention to the booking of it.” - [Observer]

Tuesday night (1/24) was the "Sincerely L. Cohen: A Celebration of Leonard Cohen" tribute at Brooklyn's Music Hall of Williamsburg, which featured loving renditions of his songs as well as readings of his poetry, by the likes of Richard Thompson ("Bird on a Wire, Study of Isaac"), Thompson's son, Teddy (“Tower of Song” and “Ballad of the Absent Mare.”), Lenny Kaye ("Don't Go Home with Your Hard-On:), Josh Ritter ("Chelsea Hotel No. 2"), Lee Ranaldo ("Famous Blue Raincoat"), Ian O’Neill from Deer Tick ("Memories"), Jared Samuel, Joan Wasser and Holly Miranda ("I'm Your Man") Okkervil River's Will Sheff ("Take This Waltz” "), and more.

The backing band was led by Josh Kaufman, who produced Bob Weir’s 2016 album The River, and featured Walt Martin, Annie Nero and Ray Rizzo and a trio of backup singers that included Cassandra Jenkins. The evening ended with everyone from the night returning to the stage as Will Sheff led a group singalong to "So Long, Maryanne." As the lights came on, the PA played "Save the Last Dance For Me" which is how Cohen finished his final concerts.

Pictures from the night are in the gallery above and video of some of the performances and the setlist are below. 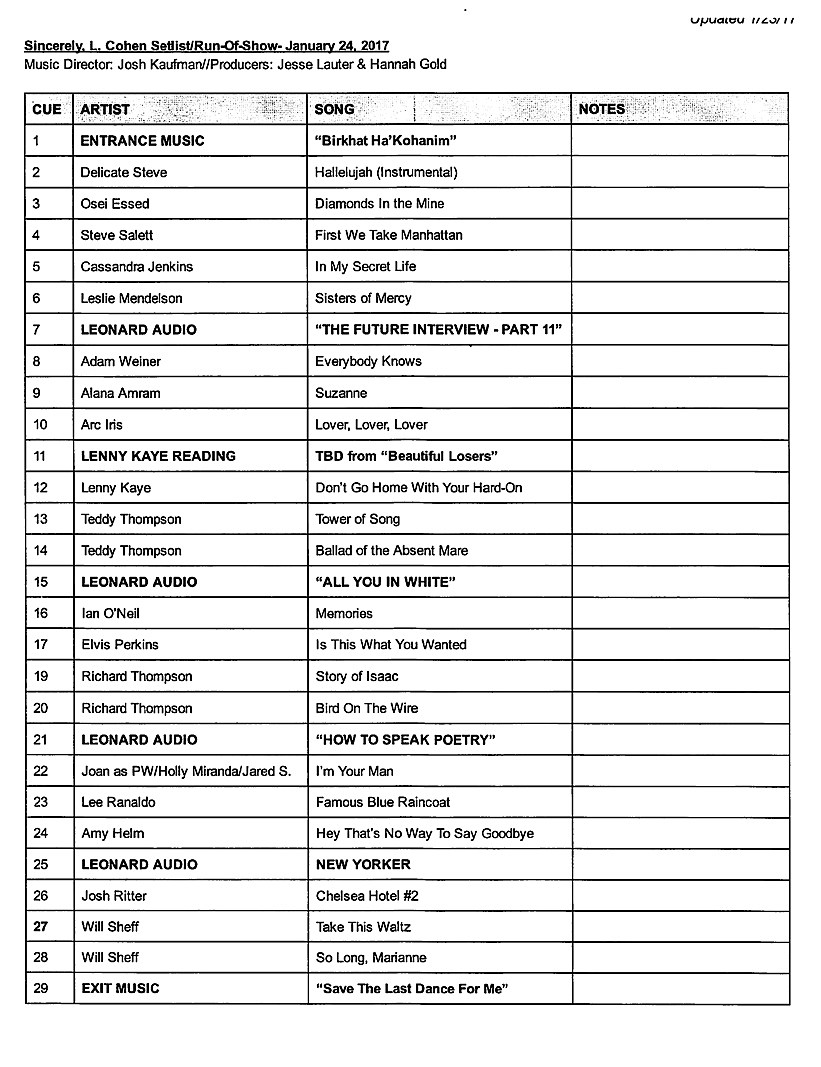 Will Sheff - Take This Waltz

Will Sheff - So Long Marianne