Pictureplane at 285 Kent in February (more by Andrew St. Clair) 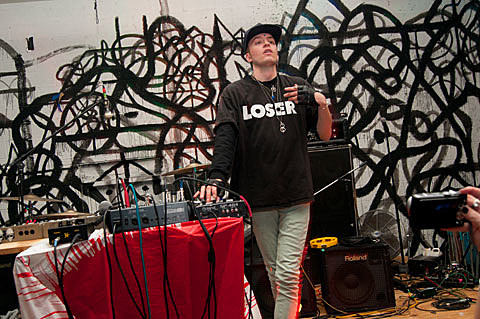 Pictureplane has some dates coming up in the next few weeks including two in NYC. The first is the LAZERPOP Northside Party at Glasslands on Friday (6/15), where he'll DJ along with DJ sets from Teengirl Fantasy (who have a new album coming out) and Hooray for Earth. Tickets for that show are on sale now. He's also got a show in Brooklyn at on July 4 at Cheap Storage (49 Wyckoff Ave) with DIIV (who have a bunch of other shows coming up as usual), Prince Rama, and Night Manager. All Pictureplane dates are listed below.

It's pretty hard to think about Pictureplane without thinking about Grimes these days, whether it be because Hipster Runoff thinks they're dating, shared bills, remixing each other, or Grimes wearing a Pictureplane shirt. So it seems like an appropriate time to quickly remind that AmEx presale began today at noon for her upcoming shows at Bowery and MHOW. In case you haven't been keeping up, Grimes dropped two collaborations with Blood Diamonds recently: one is the title track off Blood Diamonds' upcoming Phone Sex EP (due out 7/24 via 4AD); and the other also includes Kreayshawn and Tragik, and came out under the name L$D. The song's called "Don't Smoke My Blunt Bitch." Check out videos of both of those below.

In more related news, d'Eon, who Grimes released a split LP with last year, revealed an interview with Stereogum that he's a bit envious of Pictureplane: "I've seen him live a couple of times and he hypnotizes the crowd and 300 18-to-22 year old girls just want to fuck him at all times and I'm really jealous of that kind of charisma." d'Eon released the LP, simply titled LP, earlier this month and it's really great. It's a concept album that deals with real life vs internet life (there's a song called "My iPhone Tracks My Every Move"). All of the songs flow seamlessly into each other and there's a ton of musical reference points, including the art pop of Peter Gabriel, the sexy ambient R&B of How to Dress Well, and the production work you've come to expect from d'Eon. You can stream that entire album below.

Wild Nothing at Pitchfork Fest 2011 (more by Dominick Mastrangelo) 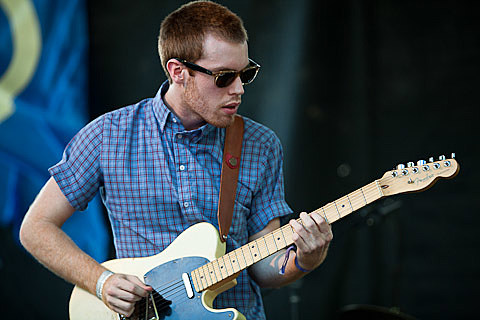 Speaking of Grimes and DIIV, they team up for a free show at River Rocks on Pier 84 on August 9. That show is with Wild Nothing, who just announced a new album, Nocturne, which is due out August 28 via Captured Tracks in the US and a day earlier in the UK via Bella Union. Check out the song, "Shadow," from that album below, along with a list of all Wild Nothing dates, and the album's tracklist.

All lists of dates, videos, streams, and more are below.