new guy is second from left 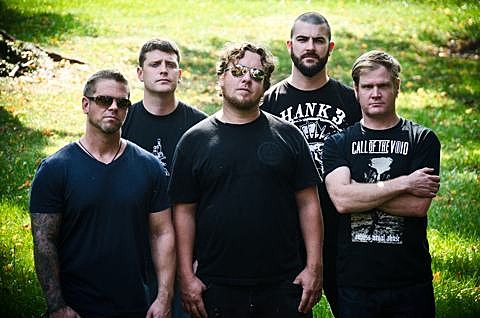 Pig Destroyer has been a band since 1997. That's a long time; some of you reading this were probably born that year. During that 16-year run, various members have come and gone -- the band has had four drummers (if you count Municipal Waste/Burnt By the Sun drummer Dave Witte's brief stint) and three samples/electronics folk, but never once have Pig Destroyer included a bassist in their ranks.

Until now, anyway. In an interview with Terrorizer, guitarist Scott Hull has announced that John Jarvis (drummer Adam Jarvis's cousin) will be joining the band on the four-string. Here's Hull's explanation for the change:

"After so many years of remaining bass-less, why did you decide to welcome a bassist into the fold now?
Scott Hull: Well, the biggest reason we DIDN'T have a bass player, or another guitarist, for so many years was that we just didn't want the added complication of someone having to learn lines that I'd already written. Additionally, we just didn't want to have another person in the band because it adds complexity; travel arrangements for shows, space in a van/bus. . .etc etc. As the years progressed, we just thought "well we've gone this far without anyone else, why bother introducing a new headache now?" But honestly, I've been wanting to broaden the scope of our music for quite some time. It would be very difficult, for instance, to really do some Jesus Lizard-y type of material without a bass player, but we want to bring that sound into our material somewhat as well as some other styles that would really require a bassist, so that really made us think about it seriously. Luckily, the bass player we chose is a really good fit technically and personality-wise. He gets where we are at and knows we are picky about what we do and when, so he wont get impatient that we aren't touring 200 days out of the year.

Does this mean you'll be retroactively adding bass lines to your old classics when playing live?

Scott Hull: Yep, we've been doing that. And for the most part, it's added some real depth to the tracks, which is exciting. In some cases, like for the songs 'Terrifyer' and 'Starbelly', it's really changed them altogether. It's very cool. I feel like we kinda reinvigorated ourselves when Adam came into the band, and we're kinda doing it again with John. Change is good.

This decision was arguably overdue; Pig Destroyer have had a tough time replicating the thickness of their recorded material when they play out in the past, and a bass presence will make a huge difference for them. The Jarvises also play together in the awesome grind/death/hardcore outfit Fulgora, who hopefully won't throw in the towel now that both guys are working on Pig Destroyer.

Pig Destroyer will debut their new lineup at Phil Anselmo's Housecore Horror Film Fest, which starts on Friday (10/25) and runs until Sunday (10/27). Housecore has quietly become one of the best American metal festivals of the year, and it'll host a couple of other significant firsts: Goblin playing their Suspiria live with the film, and Dale Crover (of Melvins) drumming for Eyehategod. You can still buy walk-up tix for the fest or venue-limited badges; check out the full lineup of bands below.