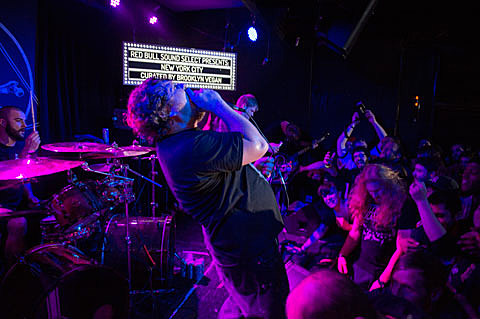 Grindcore greats Pig Destroyer have a few dates coming up this year, including a NYC show with Dropdead and Full of Hell at Music Hall of Williamsburg on March 11 (that's a killer lineup). Tickets for that show go on sale Tuesday (1/12) at noon. All dates are listed below.

Pig Destroyer put out a reissue of their classic album Prowler in the Yard in 2015, which you can still snag over at Relapse. Their last new album was 2012's Book Burner.

Guitarist Scott Hull is also busy with Agoraphobic Nosebleed, who are prepping the release of their Arc EP for January 22. It contains their first recordings since 2009 and it's the first of 4 EPs set to release in 2016. They just premiered the second of three tracks from Arc, which is called "Deathbed." Like "Not A Daughter," it's a crushing, seething 8-minute riff-monster of a doom song. More hulking and less groove-oriented for the beginning, it explodes around the 5-minute mark into a swinging, swaggering southern-rock riff that just floors. It's another stunning piece of work from Scott, Kat Katz and company that has us excited for all the new music in store from these guys.

Speaking of Full of Hell, they just officially announced their long in-the-works collaborative album with The Body (who are collaborating with everyone these days). That album will be called One Day You Will Ache Like I Ache and it comes out on March 25.

You can check out the teaser for that album, the new Agoraphobic Nosebleed song, the Prowler in the Yard reissue, and Pig Destroyer dates below...