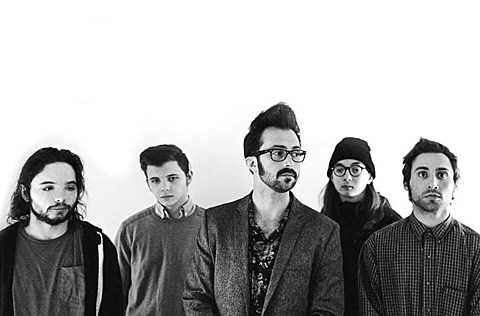 As tends to happen when punk bands release less-punk albums, a split occurred in Title FIght's fan base earlier this year when they released their atmospheric new album. There's the people who stubbornly miss the old sound, and those who embraced the band's progression. I'm not sure if Memphis, TN's Pillow Talk have a dog in this fight, but if they do I'd guess it's the latter. Their upcoming EP, What We Should Have Said, sounds rooted in the aggression of punk and hardcore, but it's equally concerned with dense shoegazey atmospheres, effected guitars, and soaring reverbed-out vocals. It's also not too far removed from the new Cloakroom album, or that band's now very influential pals Hum.

The EP comes out next week (3/3) on Animal Style Records (pre-order), and you can now listen to the premiere of the full thing in this post. The band have also run down the EP track-by-track for us, and you can read what they had to say while you listen, below.

Bend was born out of necessity. We had a really crazy opportunity to open for Weezer last year, but we were in the middle of a transitional phase when we got asked to play the show. As a whole, we were moving away from the sound that dominated Recreational Feelings and were starting to write the songs that would make up What We Should Have Said, which, I think, is on the opposite end of the spectrum. We were asked to play the show on kind of short notice, and they wanted us to play 40 minutes or more.

At the time we had written Make You Real and Room, which made sense next to only one or two songs from Recreational Feelings. So we wrote this ambient, spacey interlude to go in between the songs. We liked it so much that we decided to build on it in the studio, and it ended up as an introduction to the EP.

This is the first song we wrote for the EP. I don't think we really knew what direction we were taking our music when the song came together, but we knew it was big step away from the songs we had previously written. Pillow Talk came together really fast, and Recreational Feelings was largely us trying to figure each other out. Make You Real was our first step to getting a better idea of the band we wanted to be.

Every song on the EP is about some form of a relationship or friendship going sour due to lack of communication, and that's the underlying theme throughout What We Should Have Said. Relationships, like chapters in a book, start and end for different reasons. Make You Real is in a way about that -- looking back and wondering what went wrong, and how things would have gone had you not held your tongue.

Heaven Sent was challenging to write. My best friend was going through a really tough time, and I think it really wore him down. He was being pulled in a million different directions, and you could look in his eyes and see how tired he was. We had a minor falling out in the mix of it all.

But it's more so about growing up and growing apart from your friends. When you get older and have more responsibilities, you start working often and seeing each other less. It's important to value your friendships and be able to let go of petty problems. The lyrics "you're still my brother, heaven sent" embody that.

Some songs take time, and others come right to you. I wrote this song in one sitting, but I wrestled with the lyrics a lot.

Room is the lightest song on the ep, I think. If there's a companion to Make You Real, this is it. Musically, it's more straightforward than the others, but I really love everything the guys are doing. Sam kills it on the drums, and his parts came together well.

Lyrically, it's about looking at your mistakes and realizing how you handled a situation in the wrong way. A while ago, I was coming out of a not so great relationship. One night while getting dinner with a friend, I kept going on about how this person had contributed to it ending. My friend helped me realize I should analyze my own faults and see where I went wrong. That experience caused me to grow up in a big way. I had been projecting my own problems onto other people because I wasn't comfortable dissecting and fixing them myself. The line "If everyone is just the same, then I am of no exception" is about that.

Escape Me is my favorite song to play live. It's the longest track on the ep, clocking in at a little over six minutes. But so much happens in that time. I had a lot of room to play around with different vocal melodies. The first time the guys jammed the song at practice, I started humming along and everything fell into place pretty quickly.

I think this song is a really good finale for the ep. It's about letting go of what was and accepting what is. We talk ourselves into staying in toxic situations because we're comfortable or stuck in a routine. I wrote this song about an internal battle I was having between doing what was best for me and what was safe. It's about trusting yourself and silencing the voice in your head.