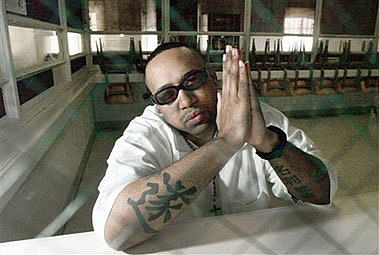 Pimp C, who spun searing tales of Texas street life into a key role in the rise of Southern hip-hop, was found dead in an upscale hotel on Tuesday. He was 33.

The rapper formed Underground Kingz with partner-in-rhyme Bun B while the pair were in high school, and their often laconic delivery paired with wittily dangerous lyrics influenced a generation of current superstars like Lil' Wayne. T.I. had the group on as guests when he remade their 1994 song "Front, Back and Side to Side" for his "King" album.

To a mainstream audience, Pimp C was best known for UGK's cameo on the Jay-Z hit "Big Pimpin'," and for "Free Pimp C" T-shirts and shout-outs, ubiquitous in rap several years ago while he was jailed on gun charges. On Tuesday, his MySpace page had been changed to read: "C the Pimp is FREE at last."

Born Chad Butler, Pimp C was found dead in a room at the Mondrian hotel, a longtime music industry hangout not far from the House of Blues on Sunset Strip, where he had performed Saturday night alongside rap veteran Too $hort. Capt. Ed Winter of the Los Angeles County coroner's office said Butler had apparently died in bed.

"At this time there's no signs of foul play," Winter said. "It appears to be possibly natural, but pending autopsy and toxicology we can't say the cause." [Yahoo]