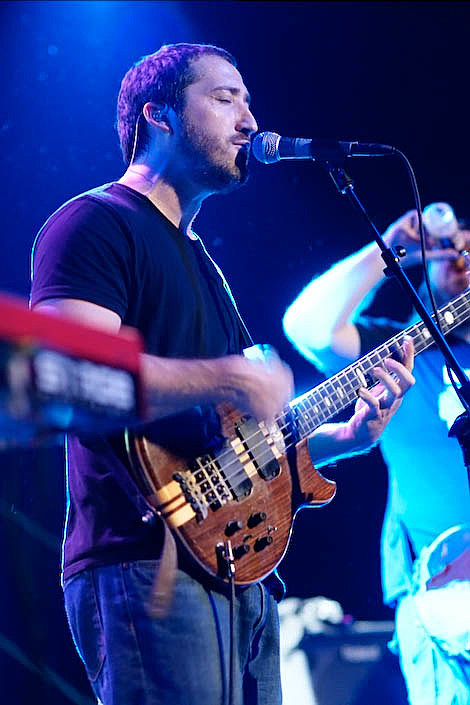 Now unfortunately we've all heard the story of band's gear getting stolen. But how many times have we heard of a band's gear being stolen mid-set, then getting it back, all without halting the music? Lets give a round of applause to Pinback.

The celebrated local indie-rock band was playing at Sunset Temple in North Park to a packed crowd as part of San Diego Music Thing. The show started at around 11 p.m., and everything was going great until about half an hour into their set, when Pinback bassist / keyboardist / singer Zach Smith glanced over to the backstage area to his right.

"Hey," he said, "did somebody steal my second bass over there?"

The show ground to a halt as the three members--Smith, guitarist / singer Rob Crow and drummer Chris Prescott--dashed offstage to investigate. A few minutes later, a visibly frazzled Crow came back onstage to explain to the audience that Smith's bass had, indeed, been swiped mid-set.

The custom-built bass is very rare, very expensive and made by the company Alembic, Crow said...Pinback's drummer saved the day. While surveying the block, Prescott explained, he spotted a man stuffing the bass into a trashcan, and then saw the man run down the street. Prescott tried to stop him several times--at one point, he says, the man begged just to be let go--before successfully intercepting him inside Queen Bee's, a venue located a few blocks away from Sunset Temple on Ohio Street -[SDCity Beat]

The thief was arrested and taken into custody.

Rob Crow played a solo set while the rest of the band searched for the bass, returning to stage after 40 minutes and continuing as a band for the next 50 minutes. The band returned for two encores.

The show was part of a string of West Coast dates that preceed their East Coast jaunt in November. The boys stop at Irving Plaza on November 12, tickets are still available.