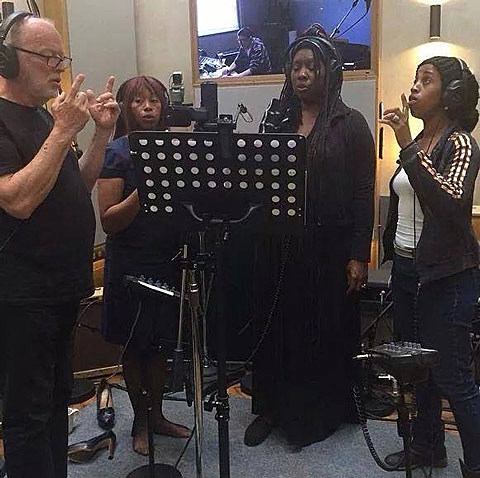 Over the weekend, a tweet from David Gilmour's wife Polly Samson lit up the Pink Floyd end of the internet like a laser show: "Btw Pink Floyd album out in October is called "The Endless River". Based on 1994 sessions is Rick Wright's swansong and very beautiful." Rick Wright passed away in 2008, leaving Nick Mason and David Gilmour as the sole remaining members.

After the tweet, the internet went into overdrive to sniff out the details. Luckily, Pink Floyd back-up singer Durga McBroom-Hudson posted a studio pic on her Facebook captioned: "YES. THERE IS A NEW PINK FLOYD ALBUM COMING OUT. AND I'M ON IT. And there was much rejoicing." You can see the pic of Gilmour and the singers above. Then, further down, she provided The Endless River's possible concept:

The recording did start during The Division Bell sessions (and yes, it was the side project originally titled "The Big Spliff" that Nick Mason spoke about). Which is why there are Richard Wright tracks on it. But David and Nick have gone in and done a lot more since then. It was originally to be a completely instrumental recording, but I came in last December and sang on a few tracks. David then expanded on my backing vocals and has done a lead on at least one of them. That's the song you see being worked on in the photo.

1994's The Division Bell was the last released Pink Floyd studio album, though that depends on what lineup you believe constitutes 'Pink Floyd,' which is a debate for a different playground.

While we wait for more info, check out Pink Floyd in their prime via the classic Live at Pompeii below.