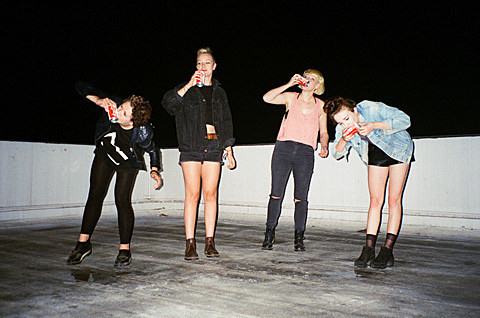 Manchester quartet PINS will release their new album, Wild Nights, will be out June 9 via Bella Union. They recorded the LP in Joshua Tree at Rancho De La Luna with Dave Catching (QOTSA, Eagles of Death Metal) and had it mixed at Brooklyn's Atomic Sound. You can check out slow-burn first single, "Too Little Too Late," via its music video, below. That will also be a 7" single with a cover of The Misfits' "Hybrid Moments" on the b-side which you can stream below as well.

The band, who were last in NYC for CMJ, are on tour in the UK this month with Drenge and Wire, but will be visiting NYC for Northside Fest, playing a late show at Rough Trade on June 13. Tickets go on sale Friday (4/17) at noon with an AmEx presale starting Wednesday (4/15) at noon. They'll be touring the rest of North America this year as well. Stay tuned. All announced dates are listed below.