Daniele Baldelli (not a recent pic) 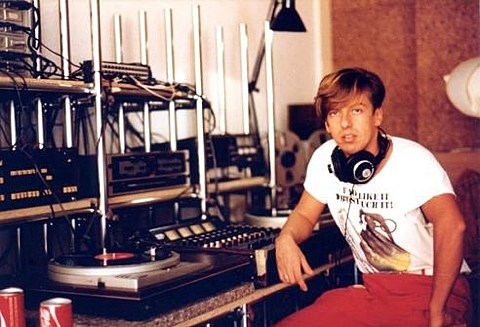 A founding father of the Cosmic Disco sound, Italian DJ Daniele Baldelli rose to prominence with his mixture of European electronica, synth pop (often played at slower speeds), equalizer effects, and ethnic folk music. Baldelli's use of African and Brazilian material helped distinguish his style from Italo disco, which permeated the clubs of Northern Italy during the 1970s. Taking up residence at the Cosmic, a venue by Lake Garda, he introduced club goers to a worldly, hypnotic sound during the late '70s and early '80s. Although the Cosmic Disco movement slowed down as the '80s progressed, Baldelli's reputation allowed him to extend his career into the following decades. [AllMusic]

Famed Italian DJ and Cosmic Disco pioneer, Daniele Baldelli will be in the US this weekend for three shows, one in Philly on Friday followed by two daytime shows in NYC. First, he plays Warm Up at MoMA PS1 on Saturday (8/2) with live sets from Indian electronic music pioneer Charanjit Singh, UK duo Simian Mobile Disco, and former Effi Briest and Up Died Sound member Hiro Kone, plus the Software-signed Maria Chavez. Tickets for that show are still available.

Then, the next day Daniele plays Output's Sundays on the Roof with a DJ set from Metro Area and Cem G. 2 PM doors. Tickets are on sale now.

Simian Mobile Disco will also keep the party going after Warm Up when they DJ a FIXED party at Cameo late night on Saturday (8/2) with FIXED regulars JDH & Dave P. Tickets for that are available. SMD will return to NYC in September when their tour performing their new live-recorded album Whorl hits MHOW, also with JDH & Dave P (tickets).

All Daniele Baldelli dates are listed, with some videos, below...