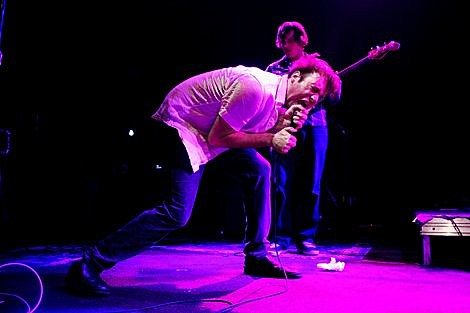 Including their recent appearance at WFMU Fest, Pissed Jeans have booked three shows in NYC in the month of October. The first is part of the Sub Pop/Hardly Art showcase at Mercury Lounge which will include a stellar lineup of Male Bonding, Obits, Golden Triangle, The Dutchess & The Duke, Moondoggies, Dum Dum Girls, and Unnatural Helpers. $12 to get in and there are no advance tickets.

Compare/contrast that lineup, which covers a wide spectrum of styles, with Pissed Jeans' show on 10/30 at Le Poisson Rouge billed as "NYU Halloween Punk/Hardcore Fest". Pissed Jeans will headline with support coming from Awesome Color, Drunkdriver, My Mind, The Sleepies, and Ex-Wife. Tickets are only $2 if you have an NYU ID and $5 without and, um, costumes are highly encouraged.

Sub Pop CMJ set times, and a live video of Pissed Jeans below...