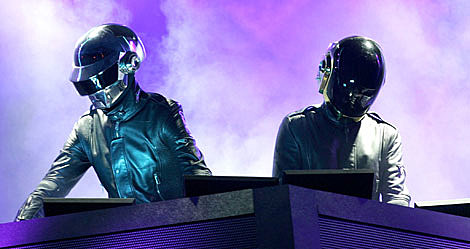 Daft Punk's first album had helped refresh house music in the mid 1990s; the second went further, rewriting electronic pop's pleasure principles to such a degree that when it came out a lot of people thought Discovery must be a put-on. They took the joy in the record for irony. Rather, the band had simply plunged into the raw popstuff of their 70s childhoods, from AOR to disco, Buggles to Manilow, rock to robotics. They wanted their listeners to get the rush of context-free delight they had hearing music as kids, and on "Aerodynamic" and "Digital Love" they succeeded wildly, dissolving a decade-plus of dance music good taste. And not all of Discovery looked back. The middle of the album is house music as string theory, with the duo finding dimensions of pleasure coiled within the tiniest loops: "Crescendolls" releases an awesome, gleeful energy by repeatedly triggering one five-second sample.

Discovery was simply the decade's best good-times record, with Daft Punk as pyramid-toting party wizards and the chipmunk Kraftwerk of "Harder Better Faster Stronger" their anthem. But this most celebratory of records has a bittersweet streak, too: Daft Punk know that a rush always carries the risk of exhaustion. Perhaps the album's most underappreciated track is the sad but gorgeous "Short Circuit", a three-minute robot graveyard of crumbled transistors and dying LEDs. But from Romanthony's first blissful, vocoded shout of "one more time!" the dominant emotion on Discovery is joy. A joy that wasn't afraid to be sentimental and funny as well as hard and futuristic, and is all the better for that. When a generation looks back and tries to catch a fuzzy hold of the music that made them happy this decade, Daft Punk's will be top of the list. --Tom Ewing [Pitchfork]