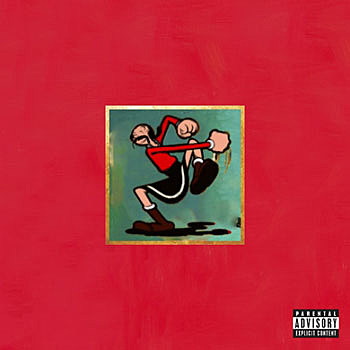 To be clear, Kanye West is not Michael Jackson. As he told MTV last month, "I do have a goal in this lifetime to be the greatest artist of all time, [but] that's very difficult being that I can't dance or sing." He ended the thought with a laugh, but you get the impression he's not kidding. Unlike Michael, he's not interested in scrubbing away bits of himself-- his blackness, his candidness-- to appease the masses. And while Jackson's own twisted fantasies of paranoia and betrayal eventually consumed him whole, West is still aware of his illusions, though that mindfulness becomes increasingly unmoored with each newspaper-splashing controversy. The balance is tenuous, but right now it's working to his advantage. On Twisted Fantasy, Kanye is crazy enough to truly believe he's the greatest out there. And, about a decade into his career, the hardworking perfectionist has gained the talent on the mic and in the control room to make a startlingly strong case for just that.
[Ryan Dombal, Pitchfork, Best New Music]