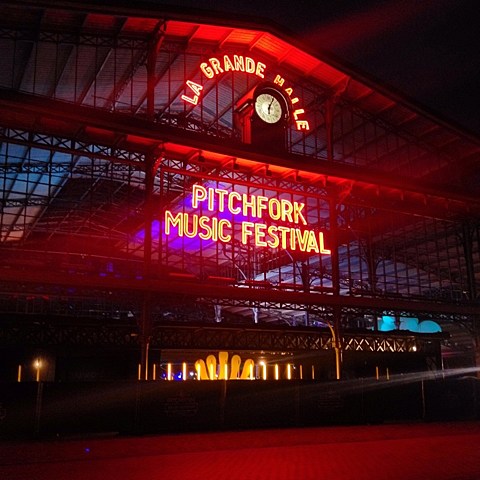 Pitchfork Paris began yesterday (10/30) in the Grande Halle de la Villette, a slaughterhouse-turned-cultural center in the city's 19th arrondissement. The festival featured two stages at opposite ends of the venue, with acts performing in immediate succession on alternate sides of the room.

Montreal's four-piece art-punk band Ought kicked off the night, injecting the already sizable crowd with good energy off the bat. Lead singer Tim Beeler channeled David Byrne, David Bowie, and most especially Jonathan Richman in his performance - which was spoken almost as often as it was sung - and the band's combination of keyboardist Matt May on Nord Electro 3 and the rhythm section's tight, dynamic and often repetitive grooves made for a refreshing take on punk.

How To Dress Well performed next, also as a four-piece. "It's nice to be back in the barn" remarked singer and songwriter Tom Krell, before saying hello to his mentor Beck, who was watching the show via live stream. The band performed many of the highlights from this year's excellent album "What Is This Heart?" while a series of muted, abstract visuals were projected behind them. I was impressed by the band's ability to recreate the album's sounds in a live atmosphere. On stage, Krell performed with two microphones - one dry and the other soaked in full reverb - between which he would modulate throughout the show, sometimes mid-phrase. Krell was backed by a drummer and two multi-instrumentalists covering violin, maracas, guitar, vocals and keys. Krell gave props to Ought for their excellent performance and also expressed his excitement to see The War On Drugs later in the night, who are his current favorite band.

The Notwist brought a packed stage including two xylophone players to the party. Compared with other times I had seen the band, I was impressed by how quickly they moved away from their songs and into heavier psychedelic territory, executing multiple movements of noise-based chaos that each felt earned and not excessive. Markus Acher's relaxed voice contrasted nicely with the more dissonant, anticipatory mood of the music, and the festival's extensive lighting rigs played especially well into The Notwist's swirling experimental soundscapes.

The War on Drugs 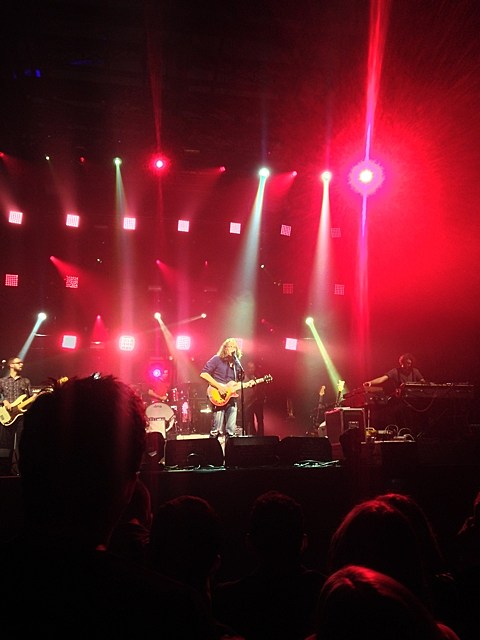 The War On Drugs performed "Burning," "Eyes To The Wind," "An Ocean In Between The Waves," "Under The Pressure," "In Reverse" and "Red Eyes" to the most palpably energetic crowd of the night. The band was as tight as the last time I saw them (in June at Williamsburg Park), and I was happy to see so many young Frenchmen jumping up and down to Adam Granduciel's guitar solos and singing along to the "Woo!"s from the album. Even within the 45 minute format, the band still took their time with the instrumental sections, extending multiple guitar solos well beyond the album's length, including an exceptional version of "Red Eyes" to end the set.

Mogwai's performance began with remarkable force. The Glasgow natives played to the biggest crowd of the night, sending their dynamic waves of emotional post-rock slamming down on the audience's ears. The band played with excellent restraint: quiet instrumental passages were pursued for minutes at a time; louder peaks were continued well past their originally-perceived climax. I was surprised by how much louder Mogwai's set felt than everyone else's - not in amplitude but in thickness. The band had a confidence in them that flowed into their music, setting a dark, almost terrifying mood within the room.

Jon Hopkins carried the mood from dark to hypnotic, delivering his tastefully emotional electronic compositions along with projections whose concepts included an alternating series of solid colors and the "Collider" music video. Hopkins was very active within his setup - which added to the energy of the performance - and a constant stream of red lights flashed around the room to enhance the ambience. The crowd reacted well to Hopkins' cinematic soundscapes, with relatively subtle shifts in the music drawing various cheers.

James Blake closed the night with performances of "Retrograde," "The Wilhem Scream," "Limit To Your Love," and an arresting show-closing rendition of the entirely loop-based "Measurements." Blake's voice was in stellar form, modulating between multiple octaves and singing over his loops with remarkable ease. I'm always impressed by how much Blake adapts his sets to fit the mood of the room, and last night's late show was rightfully less song-based and more reliant on the ambient, with a healthy dose of songs (including one new one) mixed in.

It was an excellent first day for Pitchfork Paris. The sound was spot-on for all of the artists, and I especially enjoy festivals when only one artist performs at a given time so that there is no sound bleed between stages.

Belle & Sebastian, St. Vincent and more play today's portion of the festival, and we'll be back with coverage of that too. If you're not at the fest, stream it live HERE. Today's stream begins at 1:30 PM EST with Perfect Pussy.

A few more pictures from yesterday below...

How to Dress Well 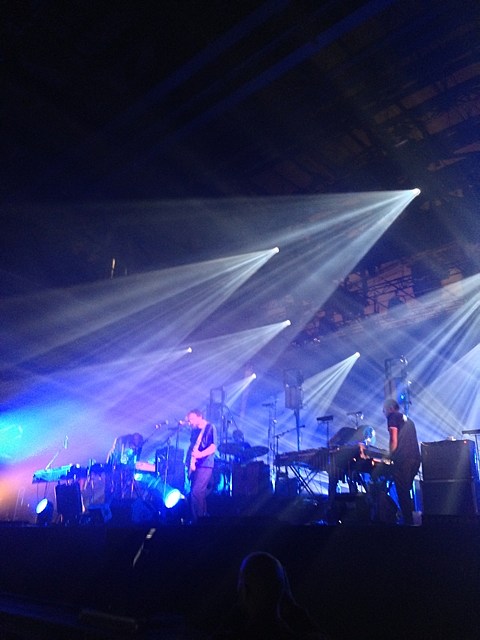 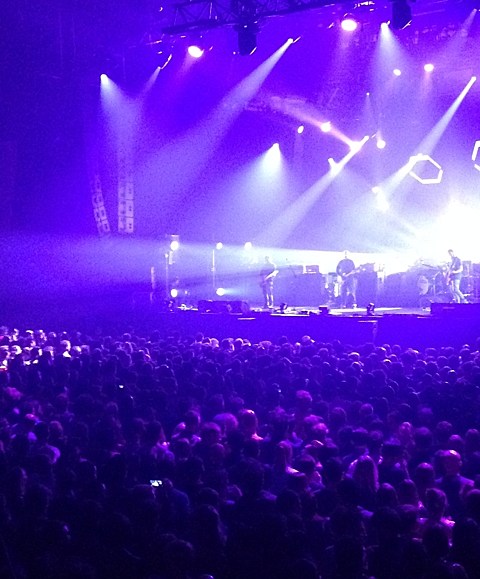