Caribou and balloons (via Jonathan Dadoun) 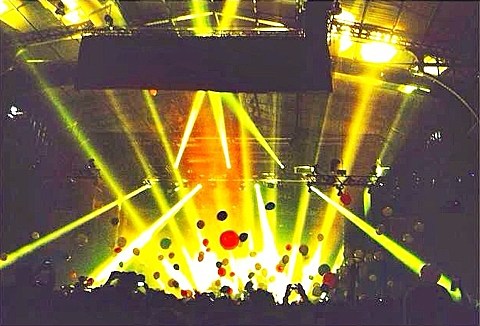 My night began with Movement, a downtempo three-piece band from Sydney, Australia. Their set was dark and atmospheric, showcasing lead vocalist Lewis Wade's strong and emotive vocals. I've had the band's self-titled EP on heavy rotation, and the show left no doubt in my mind that they can totally pull it off live. My favorite point in the set came when keyboardist / percussionist Sean Walker stepped out from behind his rig to deliver a phenomenally passionate guitar solo on the EP's second track, "Ivory."

Foxygen performed next, playing songs from this year's ... And Star Power plus some older favorites such as "Shuggie" and "On Blue Mountain." I'm not quite sure what the baseline level of chaos for Sam France performances is anymore, but I would say this is probably right around normal. His long blonde hair, red lipstick, and skinny shirtless look felt very Iggy - and while he didn't draw blood or injure himself, he did manage to jump, fall, twist and kick all around the stage (and into the crowd) - throwing the microphone, laying down, jumping on Jonathan Rado and singing about half of the lyrics. It was incredibly entertaining. However, the most improved element of this Foxygen performance was the addition of three female singers who cover (in excellent harmony) all of the vocals that actually have to be sung - allowing Sam to really do whatever he wants and have it all still work.

Jose Gonzalez performed next on the main stage, kicking off the show with a series of a half-dozen solo selections, including show opener "Crosses" and the much-beloved cover of The Knife's "Heartbeats." Both Gonzalez's vocal and guitar playing were in top form, and I was impressed by the crowd's patience throughout the show: I saw a lot of closed eyes and did not hear much talking. Halfway through his set, Gonzalez was joined by a percussionist and keyboardist, both of whom provided gentle accompaniments and occasional background vocals. The second half of the show showcased a run of patient, tasteful performances which included a few songs from Gonzalez's other project, Junip, as well as "Cycling Trivialities" and "Teardrop" from his 2007 album, In Our Nature. This set was just a few days after he announced In Our Nature's followup, Vestiges & Claws, due 2/17 via Mute.

Up next on the main stage was Dan Snaith's project Caribou, performing songs from their excellent new album Our Love. Touring drummer Brad Weber led the group through a series of Abelton-based live sequences that mapped the synth and electronic drum sounds through constant evolutions during the set. A smiling Snaith handled vocal, synth, and secondary drum responsibilities - while guitarist Ryan Smith and bassist John Schmersal provided backing vocals and filled out the rest of the sound.

Their set opened with "Our Love" and included most of the songs from the album, plus a few highlights from Swim, including the haunting "Jamelia" (sung by Schmersal), "Bowls," "Odessa," and the show-closing "Sun." As on the album, Jessy Lanza (who performed earlier in the day) lent her voice to "Second Chance" - and "Mars," "Back Home," "All I Ever Need" and "Your Love Will Set You Free" were all performed.

The highlight of the show came when lead single / Johnny Zachman song of the year nominee "Can't Do Without You" was performed near the conclusion of the set. As with every other song in the set, this was performed with masterful precision: the samples and synths were mixed with careful attention to maximize the ear candy potential of the massive sound system - and the sonic spectrum was left open enough for there to be plenty of moments throughout the set when a synth suddenly became so much louder. The energy in the audience throughout the whole show was tremendous - and as "Can't Do Without You" reached its climax, a mass of balloons was released from the ceiling of the venue, sending the crowd even further into joyful frenzy and capping off an incredible weekend in Paris.

Four Tet, Jamie xx and Kaytranada closed out the night with performances scheduled all the way until 6 AM. Were you there too? Did you make it all the way?

Meanwhile, Caribou's tour with Jessy Lanza heads to NYC for performances at Webster Hall on November 12 and 14 (both sold out).

If you haven't yet, you can check out our reviews of day 1 HERE and day 2 HERE. Watch a video of Caribou's full set below...