Ann Arbor shoegazers Pity Sex, who put out a pretty great album this year, just announced that they'll head back out on the road in January with post-hardcore band Self Defense Family (fka End of a Year, and whose singer Patrick Kindlon is also in Drug Church). And to turn what will surely be great double bills into great triple bills, they've got LVL UP supporting the first leg, and Ovlov supporting the second. The tour hits NYC on January 19 at Santos Party House with Ovlov opening. Tickets for that show are not on sale yet, but you can check Ticketweb for updates. All dates are listed, along with the tour flyer below.

Back during CMJ, Pity Sex played our BV party. We already posted one set of pictures from that show, and there's another batch of their set in this post.

Self Defense Family recently announced that their first LP under their current name, Try Me, will be out on January 7 via Deathwish. Watch the teaser video for that LP and stream one of their earlier tracks below.

LVL UP aren't on the NYC date of the Pity Sex/Self Defense tour, but they do have other NYC shows coming up. They'll be opening the previously discussed Saintseneca tour, including the NYC stop happening on January 18 at Baby's All Right. Also on that show is Broncho and Brass Bed. Tickets for that show are still available.

Before those tours, you can also catch LVL UP at Shea Stadium on November 29 with Liam Betson (Liam the Younger), Heeney, and Liquor Store. And they'll also return to Shea on December 5 for part two of the two-part Big Snow Buffalo Lodge farewell party. Joining LVL UP at Shea on 12/5 is Porches, Krill, Baked, Lost Boy?, and Bueno. And part 1 of the party happens on December 3 at Silent Barn with Twin Sister, Leapling, Celestial Shore, Ava Luna, Zula, and a DJ set from Empress Of. Tickets for part 1 and part 2 are on sale now. All LVL UP dates are listed below.

As discussed, LVL UP have an upcoming split with Porches coming out on November 26 via Birdtapes/Double Double Whammy. They just premiered one of their contributions, "Bad Blood," over at Beats Per Minute, and you can stream that, along with their other contribution, "Cross The Sea," and Porches' "Townie Blunt Guts," below.

Porches also play this year's WBAR Winter Formal (aka Space Prom), along with garage punk ragers Diarrhea Planet, Designer, and No Regrets Coyote. It takes place on December 13 at Barnard College in the Diana Event Oval, and is free, all ages, and open to the public. Flyer below. As discussed, Diarrhea Planet play another free show at Brooklyn Night Bazaar (12/14) a day later with Purling Hiss, Big Ups, and Manors.

Speaking of LVL UP, Porches, Double Double Whammy and Birdtapes, Crying (who are signed to DDW, and who feature Nick of LVL UP and Elaiza of Whatever, Dad) and Elvis Depressedly (signed to Birdtapes) are heading out on a tour together which includes a house show in NYC on New Year's Eve at David Blaine's The Steakhouse with Spook Houses (feat. Dave and Nick of LVL UP), Porches, Alex G, and Morrison Brook. All dates on that tour are listed, along with a stream of Crying's Get Olde EP, below.

More Pity Sex pics, all lists of dates, streams and videos below...

Self Defense Family - Try Me Teaser 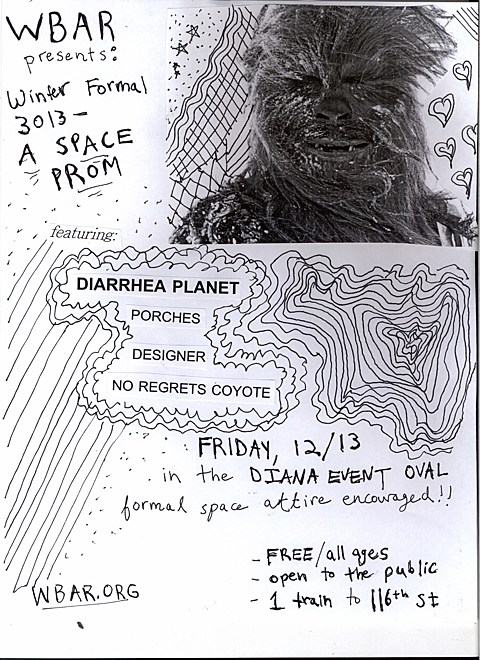 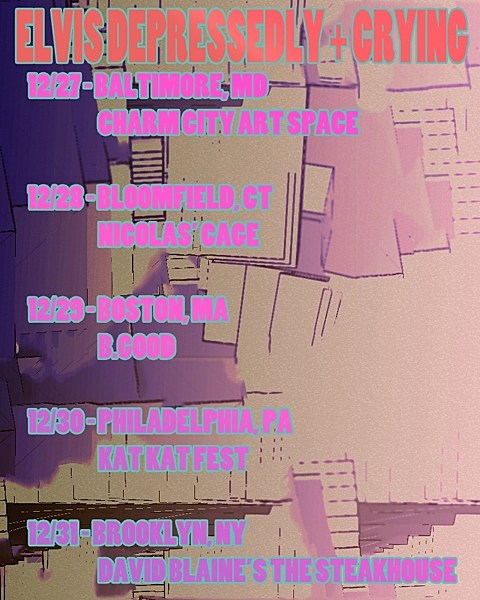