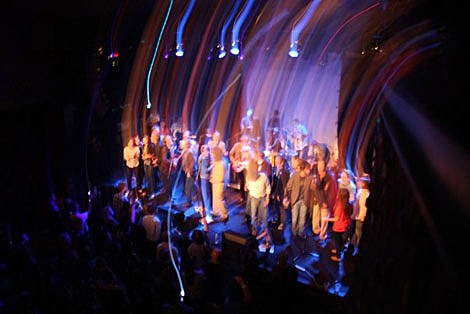 "I was on a stage with a mess of other musicians. Bright lights were shining all around. I was standing in the center in front of the drum riser at The Williamsburg Music Hall in Brooklyn. Between me and upturned faces of the audience was a wall of people. Some were old friends and some were new friends. Directly in front of me was Mark Mulcahy, to my right on the far side of the stage was Lesa Bezo with Philip and Flora from the Winterpills and Naomi Hamby from Spouse. They were circled around a microphone singing through smiles. Behind them was Jason Bourgeois in front of a Nord Keyboard, next to him was Ray Neal from Miracle Legion with a guitar, on my left was Dan Greene of Butterflies of Love and Kevin O'Rourke of Lo Fine and Jose Ayerve of Spouse. Next to Mark was Pat Sansone of Autumn Defense and Wilco. Strewn all around me were members of Gravel Pitt, David Berkeley, Chris Harford, BP Helium, The Parkway Charlies, Senator, Spouse, Lofine, The Mericans, Jeff Ginsburg, Biet and Gryphon, The Autumn Defense, Winterpills, Butterflies of Love, and The Gravel Pit. Directly behind me was the smiling face of Brian at the drums. He was surrounded by people shaking and banging on whatever they could find. Sitting on the drum riser behind him with a guitar was Frank Black and we were all singing, "I'm freeeee. Free fallin'!"

It was the finale of a long, night of music. It was an "all-star" jam, folks. The only things missing were Eric Clapton, Phil Collins, and Paul Shaffer.

The day before, I spoke to Mark on the phone and he asked me if Brian and I could be in charge of the encore finale thing. "What song?" I asked. "Free Fallin'" He replied. Then we laughed.

The event was called Ciao My Shining Star and was a concert in memorial of Melissa Mulcahy and in tribute to Mark Mulcahy's music. Over seventeen acts were lined up to perform in a three and a half hour show. Everyone got about ten minutes. It was remarkably organized and on time. This was due in large part to the tireless effort put in by Richard Murray and Myles Mangino and also to the camaraderie of all those involved..." [Henning]

That's part of a review by one of the musicians involved in the September 20th benefit show at Music Hall of Williamsburg. It's the same show that the new Thom Yorke video debuted at, and as henning points out, included Frank Blank of the reunited-again Pixies. Videos from from that are below, and a similar show will happen at Toad's Place in CT on November 13th.