Pixies at Hammerstein Ballroom in 2009 (more by Tim Griffin) 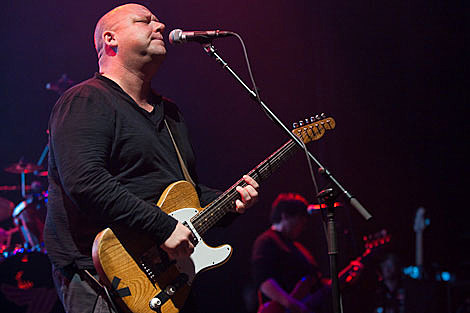 The Pixies celebrated the 20th anniversary of Doolittle on a 2009 tour that included 4 NYC dates. They've since continued touring the album and are now embarking on another Doolittle run that they're dubbing the "Lost Cities" US tour. The tour will hit smaller cities in the US that the initial tour didn't stop in. Surfer Blood open most of the tour and Imaginary Cities open the last few dates.

"Two years and counting in this celebration of Doolittle's 20th anniversary," laughed drummer Lovering. "But people keep asking us to bring 'Doolittle' to their city, and we're really happy to do it."

The tour will start in Montclair, NJ, where the band will play on October 27 at Wellmont Theatre with Surfer Blood. The tour moves to Asbury Park the next day and then to CT before continuing to NH, ME, Rochester. It then hits Easton, PA and then Huntington, NY. No NYC dates, but lots of options for those willing to take a short trip. Tickets for all shows go on sale on July 15th.

Speaking of Surfer Blood and the Pixies, Surfer Blood recently covered "Gigantic" for A/V Undercover with Sarah Baldwin from The Girls at Dawn on lead vocals. Watch that below.

"We are all big fans of Surfer Blood," said Pixies' Black Francis. "They're a young and energetic band and write great songs. And it will be terrific to have Imaginary Cities back on the road with us. They were a big success on our Canadian tour earlier this year."

Black Francis has shows coming up too including July 24 at Le Poisson Rouge. Tickets are still available.

All Pixies tour dates with more info on what to expect at the shows, and that video, below...

On the "Doolittle Tour," the band will perform all of the songs from their 1989 classic Doolittle and its related B-sides. "Weird at My School," "Dancing the Manta Ray," and "Bailey's Walk" among them. Doolittle, rated the second-best album of all-time by the NME, was the band's third album and the first to chart on Billboard's album charts, and includes classics such as "Debaser," "Wave of Mutilation," "Here Comes Your Man," "Hey," and "Gouge Away."

An imaginative cinematic production has been created for The Doolittle Tour. Designed by long-time Pixies lighting designer Myles Mangino and designer Paul Normandale, the set features four huge, undulating, eyeball-like spheres flown just below the lighting rig and are part of the concert's light show. Filmmakers Judy Jacobs, Tom Winkler, Brent Felix and Melinda Tupling were brought on board to create 12 films especially for the production. The films are projected onto a massive backdrop video screen to accompany 12 of the 21 songs that comprise the show.

As an example, visuals accompanying the song "Debaser" are from a compilation titled "Forbidden Images." The hauntingly beautiful black and white footage from the 1920s depicts the beginning of the women's rights movement, showing women's exuberant playfulness, femininity and sensuality. The footage, a little too progressive for its time period, was originally banned from theaters.

For "Here Comes Your Man," a four-way split screen displays close up images of the band members dancing along to the song; "I Bleed" sees blood dripping down the screen in time to the music; "Hey" features hand-drawn animation of the song's lyrics by Hollywood animator Tom Winkler; clouds, black holes, and Mankind's arrogance destroying the Earth are the focus for "Monkey Gone to Heaven," while "La La Love You" is a humorous animated piece starring hearts with legs.

The concert opens with the showing of the 1929 silent surrealist short film, "Un Chien Andalou," which was produced in France by Spanish director Luis Bunuel and artist Salvador Dali, and provided the impetus for Black Francis in writing "Debaser."

Since the "Doolittle Tour" kicked off in Dublin nearly two years ago, the Pixies have perfected the extravaganza, playing to sold-out crowds in Ireland, Scotland, Frankfurt, Amsterdam, Brussels, Paris, and to 20,000 fans over four nights in London. The band then first brought "Doolittle" to America in November 2009 where it played multiple-night sell-outs from Los Angeles to Chicago to New York, then again in the fall of 2010 where it criss-crossed the country, also to capacity crowds. Earlier this year, "Doolittle" played 18 Canadian dates, the most extensive tour the band had done there. The tour has received five-star reviews in the [London] Times, the Guardian and the Independent, and the U.S. press loved the show as well: "'Doolittle' still plants the freak flag in alt-rock's twilight zone, where lullabies meet blasphemy, waves of mutilation pound forests into driftwood, and all good monkeys go to heaven." "...an almost indescribable joy..." Canada's National Post called the show "dazzling," theMontreal Gazette said "It was absolutely wonderful," while the Ottawa Sun described the event as "a night of surrealistic musical fantasies."

"We've been together now longer than we were originally," added Lovering. "And to be honest, we're amazing that people still want to see us. We're very fortunate to be out there and doing shows, and that there is a demand for us."

Dates for the Pixies' Fall 2011 leg of the "Doolittle World Tour" are as follows: