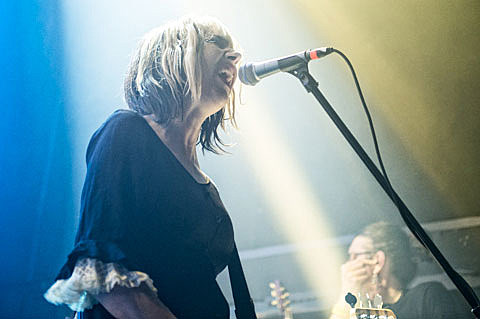 Pixies recently lost bassist Kim Shattuck (of The Muffs) after she joined as Kim Deal's replacement earlier this year, and now Shattuck has offered some insight as to how she was kicked out of the band. In an interview with NME, she says:

I was surprised. Everything had gone well, the reviews were all good and the fans were super-nice about everything. They were like, 'We love you, New Kim!' We said goodbye at the airport and the following morning the manager called me and said: 'The band has made the decision to go with another bass player.' I was shocked...

I get the feeling they're more introverted people than I am. Nobody really talked about deep issues, at least out loud. There was a show at the Mayan in Los Angeles where I got overly enthusiastic and jumped into the crowd, and I know they weren't thrilled about that. When I got offstage the manager told me not to do that again. I said, 'Really, for my own safety?' And he said, 'No, because the Pixies don't do that.'

The Pixies replaced her with Paz Lenchantin (A Perfect Circle, Zwan, The Entrance Band), and their tour with Paz will hit the NYC-area on 1/19 at Capitol Theatre tickets) and 1/21 at NJPAC with FIDLAR (tickets).

Meanwhile, Paz will be in NYC this week as a member of The Entrance Band who open for Mikal Cronin at Webster Hall tonight (12/11). Nude Beach and special guests are on the bill too, and tickets are still available. (The Entrance Band were also just in NYC opening for Mazzy Star.)

And lastly, former Pixies bassist Kim Deal is kicking off a tour with her band The Breeders this week. That tour hits NYC on December 19 and 20 at Webster Hall and will see the band playing their classic first two albums, Pod and Last Splash. Speedy Ortiz, who just released a new single from their upcoming EP, open both NYC shows and most other dates. Tickets for both Webster Hall shows are still available.