...and those new dates are now on presale 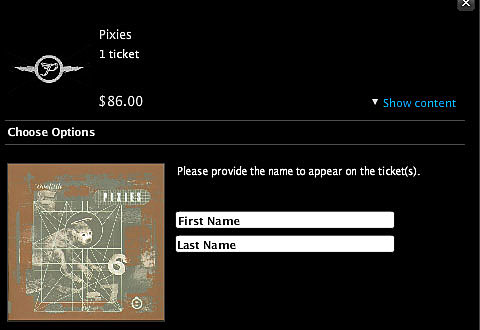 "JERUSALEM (JTA) -- In more apparent fallout from Israel's interception of a Gaza-bond flotilla, the American alternative rock band the Pixies canceled a scheduled concert in Israel.

The band was scheduled to perform Wednesday in Tel Aviv in its first concert in Israel.

"The decision was not reached easily, and we all know well the Israeli fans have been waiting for this visit for far too long," read a message received Sunday by the concert's producers in Israel from the band's management, according to reports.

"We'd like to extend our deepest apologies to the fans, but events beyond all our control have conspired against us. We can only hope for better days, in which we will finally present the long awaited visit of the Pixies in Israel."

Two other groups, Klaxons and the Gorillaz, canceled their scheduled performances in Israel following the deaths of nine activists during clashes with Israeli Navy commandos during the boarding of one of the flotilla's ships early on May 31.

Pixies won't be heading to Israel, but they will continue touring in 2010 with more "Doolittle" shows now scheduled through the end of September. There were four NYC Doolittle shows in November of 2009. The closest show to NYC at the moment is Philly in September of 2010, and those tickets, like all the new dates, are on presale now ("All pre-sale ticket purchases include a download of the live recording from the show, delivered to the purchasing fan via email the day after the show*. Pre-sale prices are all-in, and are less than total cost of tickets at public outlets. This fan-only presale ends at 11:59 pm on Friday, June 11. All tickets can be claimed at WILL CALL, unless otherwise noted.). All dates and a widget that will get you a free live EP right now, below...