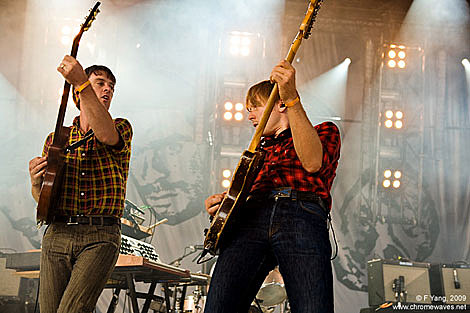 "Somehow, in its fourth year on Hogtown soil, the Virgin Festival has pulled off the impossible: Amalgamating endlessly changing variables into a cohesive, enjoyable affair. It pleases with just the right ratio of talent to timing and music to distractions. Packed with everything from singer-songwriters and hip-hop to indie gods and blues freaks, the 2009 edition of Virgin Festival was an endless onslaught of sensory overload. Yet despite a stream of diversions such as Thai massage, autograph tents and burlesque pole dancing, music was still the focus.

Starting off modestly, the first day was a slow burner. Not until early-evening did the ample audience show enthusiasm as Scottish outfit Franz Ferdinand revved 'em up. Garnering the most praise, no doubt due to their influencing virtually every other band on the bill, The Pixies nailed a set full of favourites...

...it was the double finale of 25-year-old electronic duo Pet Shop Boys and sinister cult hero(es) Nine Inch Nails that ensured the festival was a raucous success. With PSB boasting the only full-fledged multimedia extravaganza via video, lights, iconic '80s imagery and, er, shoulder pads, their spirited commingling of past and present was as engaging as it was fun.

As for Nine Inch Nails' reportedly final Canadian show, it was a shocking shot of stellar rage delivered with professionalism and gusto, especially when main man Trent Reznor started smashing instruments a mere three songs into the set. While Reznor shows no signs of slowing down, it was still sad to think that such a spotless gig could be the last time we catch him." [Metro Toronto]

Pet Shop Boys are now on a tour of North America that includes two NYC shows at Hammerstein Ballroom this week (Tuesday and Wednesday). Tickets for both shows are still on sale. All dates are below.

For Nine Inch Nails, the Virgin Fest was the seventh, and only Canadian, stop on this final leg of their "Wave Goodbye" tour. Peter Murphy did not join the band in Canada, but he was at both Chicago shows at Aragon Ballroom the two nights prior. After a night off, NIN will play their first LA show at the Hollywood Palladium on 9/2. The setlist for the first Chicago show is HERE. The setlists for Chicago Night Two and Virgin, are below...