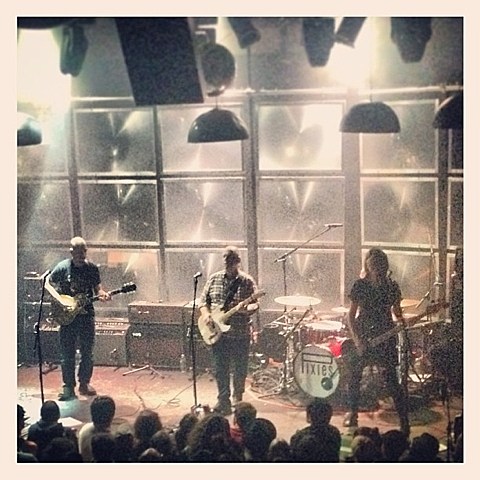 Pixies may have lost Kim Deal, but they're still fully back in action with a new EP out and a tour (with Kim Shattuck of The Muffs in Deal's place) that kicked off in LA earlier this month, hit Riot Fest Chicago over the weekend, and came to NYC last night (9/17) for the first of four shows here. Last night's show was at Bowery Ballroom with Reignwolf opening, and it saw the band playing an hour-ish long set with a fairly even mix of their initial albums (except Bossanova, which they didn't play any songs from) and some of the new material, plus an opening salvo cover of The Fall's "Big New Prinz." Check out the full setlist and a video of them playing "Where Is My Mind" below.

Pixies' four-night run continues at Bowery Ballroom tonight (9/18), again with Reignwolf, and it also hits Music Hall of Williamsburg on Thursday (9/19) with Meg Myers, and finally Bowery Ballroom on Friday (9/20) with Parquet Courts. All sold out.

Before that run of shows began, Pixies appeared on Late Night With Jimmy Fallon on Monday (9/16) to perform "Bagboy" and a web exclusive of "Indie Cindy" from their EP. Fallon videos, along with the video and setlist from Bowery Ballroom, below...