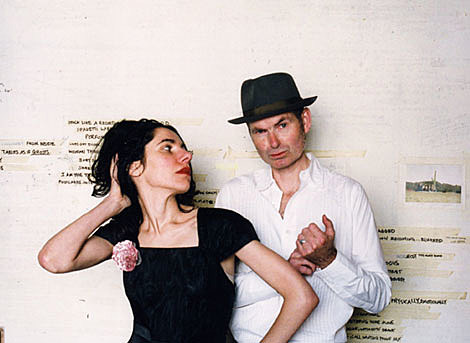 We are happy to announce that Polly & John will make a whirlwind visit to the States in March ahead of their album release. They will perform at SXSW in Austin, Texas on Saturday, March 21st. Next stop will be an intimate show at LA's El Rey Theatre on Monday March 23rd before heading to New York for a show at The Fillmore @ Irving Plaza on Thursday March 26th. Polly and John will perform songs from their forthcoming album as well as their first collaboration, 1996's Dance Hall At Louse Point. They will be backed by a band that comprises of Eric Drew Feldman, Jean Marc Butty and Giovanni Ferrario. Tickets for the LA & New York shows go on-sale this Saturday, February 14th and are available from the following outlets:

El Rey - LA, March 23rd
Tickets available on-line at www.ticketmaster.com or by calling 213-480-3232. Tickets will also be available at The Henry Fonda box office which is open Monday - Friday, 10am - 6pm.

The Fillmore At Irving Plaza- New York, March 26th
Tickets available online at www.livenation.com or by calling 877.598.8694. Ticket will also be available at The Fillmore New York At Irving Plaza box office which is open Monday-Friday, 12pm-6:30pm and Saturday, 1pm-4pm. For information, call 212.777.6800

Their new album is called 'A Woman A Man Walked By'. Tracklist below...

1. Black Hearted Love
2. Sixteen, Fifteen, Fourteen
3. Leaving California
4. The Chair
5. April
6. A Woman A Man Walked By / The Crow Knows Where All The Little Children Go
7. The Soldier
8. Pig Will Not
9. Passionless, Pointless
10. Cracks In The Canvas