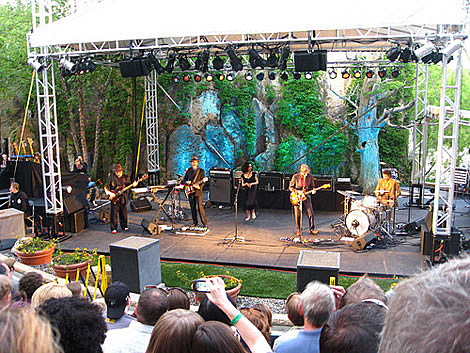 "I've been a PJ Harvey fan for years, but never got around to seeing her until tonight. Only songs from her two albums with John Parish were played -- understandably, as this is the tour for A Woman A Man Walked By --- and though this was somewhat of a disappointment, it was wonderful to finally see her. Since I got the aforementioned album I've been loving it, but hadn't realized just how...theatrical it is, for lack of a better word, and she played that aspect up on stage. One minute she'd be doing a spazzy dance and the next she was still, arms at her sides, doing delicate as the song demanded it. Doug and I disagreed on the lighting: it reminded him of our high school, and I thought it was perfectly intimate. The bare set and minimal lighting matched the rawness of the music for me." [Alicia DK]

The above review is from PJ Harvey and John Parish's Beacon Theatre show on June 9th. That gig was part of their A Woman a Man Walked By tour, which finishes on the West Coast this weekend (June 21st). The colorful shot above was from Saturday's Minneapolis show. The setlist from both of those shows are below.

PJ Harvey and Parish have a long history together - the pair also collaborated on Harvey's most recent solo album, 2007's White Chalk. The band on that disc was filled out by members of Dirty Three, Eric Drew Feldman and Jim White. That band (Dirty Three) will be in NYC and touring North American in September.

Videos from the Beacon show, setlists, and all tour dates, below...