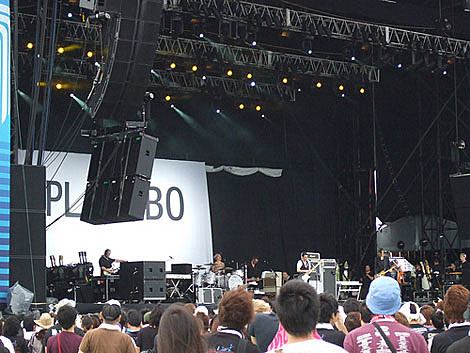 PLACEBO have today announced they have been forced to postpone their forthcoming tour of North America after their lead singer, Brian Molko, collapsed on stage at Summer Sonic Festival in Osaka, Japan. Brian had picked up a virus in Asia which, coupled with jet lag and exhaustion, caused the problem after the first song.

Brian is now back home in London recovering, but has been ordered by his doctors to take a 6 week long period of rest. Regrettably therefore, the band and management have no option but to postpone the forthcoming North American tour.

A similar incident just happened to Steven Tyler and Aerosmith (which is related to the new ZZ Top show at the Beacon Theatre).

For NYC, the Placebo cancellation means no show at Terminal 5 on October 11th (thx remphish). A video that was taken right after Brian fell, and more of the cancellation message, below...

Riverman Management commented, "This is pretty devastating for everyone - we've only ever cancelled 3 shows in Placebo's 14 year history, however Brian's health is paramount. Our sincere apologies go out to Placebo's loyal American fans who have waited a long time to see the band. We will try and do everything to re-arrange the dates as soon as possible".

The band have had an intensive worldwide schedule this year, promoting their 6th studio album 'Battle for the Sun', this includes 24 high profile festival performances over the summer, an unprecedented amount for any band in 2009.

Tickets can be refunded at the point of purchase.