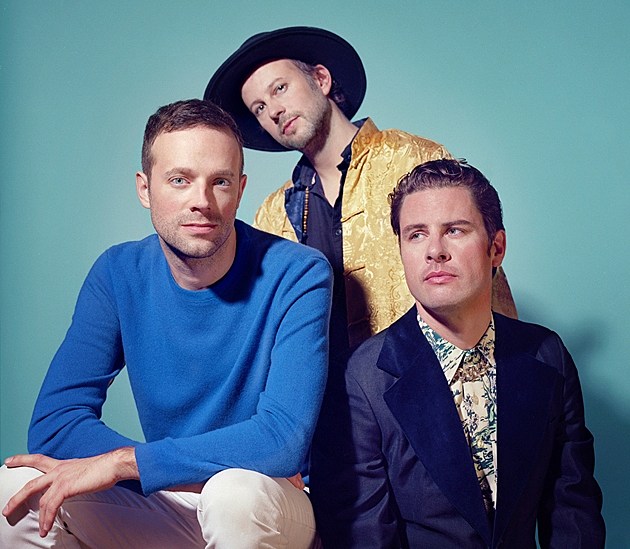 Montreal indie rockers Plants and Animals are set to follow 2012's The End of That with their fourth album, Waltzed in from the Rumbling, on April 29 via their longtime label home Secret City. The album's lead single "Stay" is the type of warm, welcoming pop song you probably expect from Plants and Animals (and 2000s Canadian indie rock in general). Judging by this song, they're still in fine form.

We've got the premiere of the song's video, which the band made with director/dancer/choreographer Hanako Hoshimi-Caines. The video stars three dancers, who Hoshimi-Caines has worked closely with before, one of which filmed his parts in Tel Aviv. (The other two filmed in Montreal.) Here's what Hoshimi-Caines had to say:

Originally the idea was to get three phenomenal dancers I had worked with in Stockholm to film themselves in their respective cities: Tel Aviv, Tokyo and Frankfurt. We were really curious to see what would come back if we sent them a simple score asking for a specific shots but ultimately asking them to pull out their chops, show us their hearts and dance the song. Then we'd edit it together and voila. So it was about seeing three individuals really engage themselves in the making and feeling of movement through the song in order to get a physical sense of the music. We ended up getting footage from Andrea in Tel Aviv and filmed Louise Michel and Francis in Montreal with the same idea. In a way we wanted to put the song in the hands of these dancers and then Yves Bourgeois did his own dance with the footage in the editing room. I think we made a video that is dancing the dance, which is dancing to the music.

The band themselves add:

We knew early on that we wanted a dance video but we didn't have concept for it beyond that. Once we got talking about it, we realized that we didn't need much of one--that really good dancers getting to know the song then interpreting it would be totally compelling. Three seemed like the magic number. We didn't want it to be about relationships or sex or synchronized cheerleading. We wanted it to be something personal and internal, expressed externally and viscerally. Hanako handled the rest. She's a dancer and choreographer and had worked closely with the dancers in the video in other situations. One of them did his shoot in Tel Aviv with his boyfriend behind the camera and he emailed it in. That's their cat. The other two were in Montreal: one in a studio with the speakers turned up loud and one out in the snowy woods on top of Mount Royal. Yves had a great feel for the motion from behind the camera and in the editing room. Together they put this whole crazy puzzle together on top of the song and it fits it like a glove.

Watch the video below.

The band will also support the album on an international tour, which hits Canada, the US, London and Paris. There's a Brooklyn show happening on May 13 at Rough Trade NYC. Tickets for that show go on sale Friday (2/26) a noon.