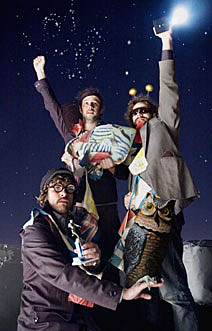 Plants and Animals blew the crowd away when they opened for Wolf Parade during their last Montreal residency. Their new album Parc Avenue drops March 25th on Secret City, and I think you'll be hearing a lot about these guys. And with good reason. They harness a 60's folk-rock sound channeled through a classic 70's, Todd Rundrgren-style production. Their songs start off unassuming and then build to these majestic conclusions.

Check them out at SXSW this year. More tour dates, and a video, below...