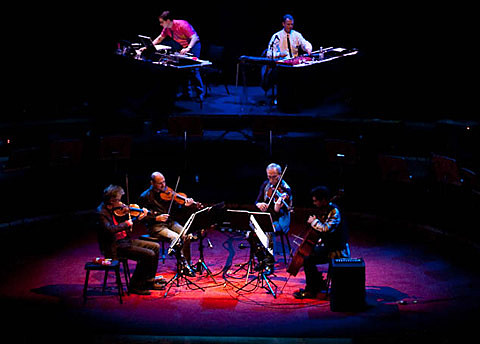 Both Awake and Jefferson Friedman: Quartets are out now via New Amsterdam (congrats to both groups). As stated above, Matmos will join in to assist in the performance of the latter at the show, which will also house a screening of the new animated film Plan Of The City "about the architecture of New York City blasting off into outer space and resettling on Mars". Whoa, far out bro. Check out a teaser for that film below, and get you tickets for the May 6th show at LPR while they are still available.

Matmos is also scheduled to head out to the Manchester International Festival in July to join Marina Abramovic, Antony Hagerty, Willem Defoe (yes, Green Goblin from Spider Man) and more as part of the stage production of The Life and Death of Marina Abramovic:

Manchester International Festival and Teatro Real Madrid present the world premiere of a startling new piece for the stage: The Life and Death of Marina Abramovic, a biography of the godmother of performance art, re-imagined by visionary director Robert Wilson.

The show features scenes from Abramovic's life and career, from her Serbian childhood to her work as a performance artist. Featuring original and traditional music, including songs written and performed by the incomparable Antony (Antony & The Johnsons), this ground-breaking show brings together the worlds of theatre, art and music to thrilling effect.

No word on if the pieces compsed for the production will ever see the light of day outside of the UK.

In semi-related news, the ever-collaborative Matmos has worked with members of The Princeton Laptop Orchestra (PLOrk) in the past and the collective will play 92YTribeca TONIGHT. PLOrk will bring an "evening of wildly innovative electronic music, live 3D video and hacked video game hardware." Tickets are still available.

Matmos is hitting the road in Europe in May much to the semi-disappointment of Matmos member Drew Daniel:

"Drew is very sad that he will be missing Maryland DeathFest this year, but touring Europe with Jay Lesser and John Wiese will make up for missing Corrosion of Conformity's reformation of the Animosity lineup." - Matmos

Turn that frown upside down Drew, you can still catch the Animosity lineup on tour (they play Brooklyn Bowl on 7/20, tickets go on sale at noon today).

Tour dates for that Matmos trek, the Plan of The City Teaser video and more, below...