Plow United keep it punk, fold their own laundry 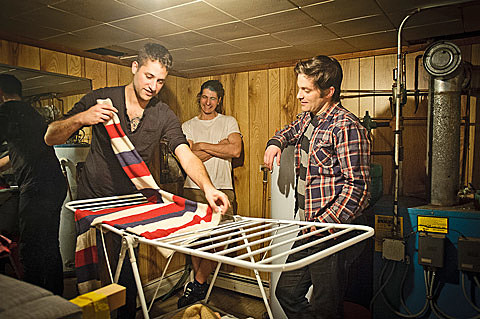 Formed in the early 90s, Delaware poppy punks Plow United took the bulk of the past 15 years away from the road and the studio to concentrate on other bands and, you know, life shit. But late 2011 the band returned as part of the Philadelphia edition of Riot Fest and has played subsequent scattered shows since.

Aside from live dates (we'll get to that in a minute), the reunion is bearing fruit as well, with a new album, Marching Band, set for an April 2 release on Jump Start Records. Stream that LP in full below next to a video for "Human 2000." Preorder the record if it tickles you in the right places.

Marching Band will be celebrated at a weekend of East Coast dates scheduled to kick off tonight (3/27) in NYC with an appearance on the Chris Gethard Show, followed by a live appearance at Knitting Factory on Thursday (3/28) with Iron Chic and The Unlovables. Tickets are still available. All other dates are listed below.