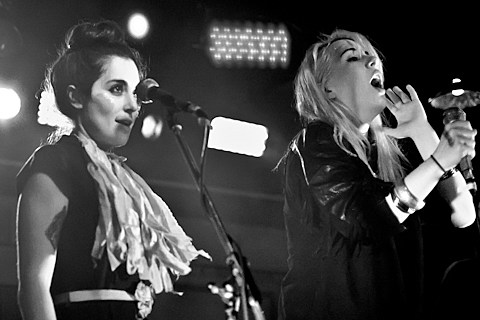 2011's short list of nominees for Canada's Polaris Music Prize were announced. They include a mix of indie veterans, grammy-winners, a sax player who has played with those grammy winners, and some new kids on the block like the super buzzy The Weeknd whose resume includes working with Drake. Full nominee list is below.

One of the artists, Austra, will release a remix EP to follow-up their latest release Feel it Break. The remix collection, entitled SPARKLE will be released digitally on July 26th and on wax on August 23rd. The release features remix contributions from MNDR, Mark Pistel, and Planningtorock with the digital collection having an additional four bonus remixes. Preorder it at Domino, and download/stream one track, "Spellwork (MNDR Nighttime Remix)" above/below.

Reminder, look for Austra to play a FREE show on July 14th supporting tUnE-yArDs at Pier 54 in NYC. They'll also be on hand to support Cold Cave at Bowery Ballroom on August 6th (tickets). Cold Cave also plays NYC next week, at Knitting Factory with Cult of Youth on July 12th (tickets).

Austra song stream and dates and the Polaris Music Prize nominees are below.