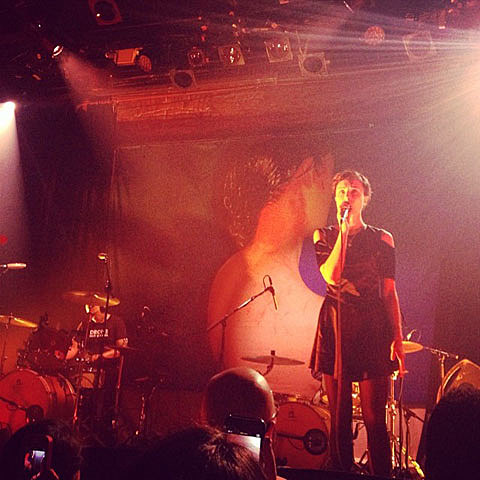 Polica wrapped up their most recent North American tour with two sold out NYC shows: Bowery Ballroom on Monday and the one I saw last night, June 17th, at Music Hall of Williamsburg.

I had last seen the Minneapolis foursome at Webster Hall shortly after their latest record, Shulamith, was released - and was surprised to hear singer Channy Leaneagh confess in the middle of that show that it was one of the worst concerts the group had ever played. For the record, Polica, who played Bonnaroo over the weekend, still sounded great at Webster, but they sounded even better last night. As was to be expected, the band was far more comfortable with the new material on stage, weaving flawlessly through the Shulamith-heavy setlist that showcased almost all of the bonus edition's tracks, including an encore-closing performance of John Madara and David White's "You Don't Own Me" (a song made famous by Lesley Gore), which served as a fitting complement to the "just let me be free" attitude that run's through so many of the band's anti-relationship lyrics. Listen to a studio-recorded version of that cover of a cover below.

The setlist also included three songs from the group's 2012 debut album Give You The Ghost ("Amongster", "Dark Star" and "Lay Your Cards Out") as well as a brand new song towards the end of the set. As always, the sonic combination of two drum sets, bass guitar, distorted synths and Channy's affected soulful vocals offered a refreshing change from typical rock aesthetics - and the group was in fine form throughout the night, paying strict attention to dynamics and nailing every change with remarkable ease. There's always a lot to watch at a Polica concert - between Channy's flowing dance moves and the carefully planned intricacies in Ben and Drew's drum patterns - and I could have easily gone for another 75 minutes of music as the band's set drew to a close.

Polica begins their Glastonbury-included European tour on Saturday as we eagerly await more NYC shows and recordings, hoping the band continues to push things forward through their unique approach to music. You can also catch them this year at ACL. on the just-announced lineup of Treasure Island, and at one of the many dates listed along with their new video for "Raw Exit" and the "You Don't Own Me" stream, below...

"""You Don't Own Me" is a cover by Lesley Gore released in 1963. We've been playing this song live for the past year on all the Shulamith tours. "You Don't Own Me" says all the things I try to say in my own songs: it's one of the most lyrically perfect songs I've ever heard and Lesley Gore delivers it like no other can, so thanks to her for being and thanks to you for listening." --Channy Leaneagh