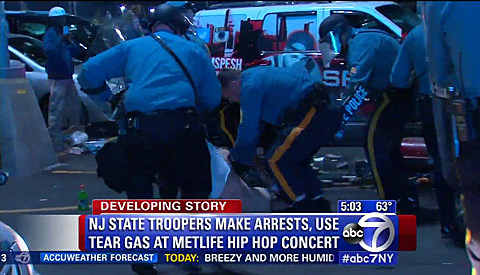 Witnesses say the disturbance began around 7 p.m. due to an altercation between concertgoers. That's when officials shut the gates to the show, the Hot 97 Summer Jam at the MetLife Stadium in East Rutherford, causing a logjam of people at the MetLife gate, which in turn led to metal barriers being toppled and thrown.

After concertgoers began throwing bottles in response, police then took up a defensive V-shaped position in front of the stadium gates as a barrage of bottles pelted the officers.

An armored State Police vehicle came into the middle of the crowd and activated a piercing alarm to try to disrupt the crowd of about 1,000 people.

"Apparently a fight happened inside, so they stopped letting people inside," said Chris Figueroa of Long Island, who was in the middle of the crowd. "I never experienced anything like that -- I thought somebody might've had a gun."

"We ran by the police, and they were ready with their sticks and Mace," Ugarte said. -[App.com]

Several rounds of tear gas were released into the crowd by NJ State Police who have released a statement:

This evening, security personnel at one of the entrance gates to MetLife Stadium were confronted by crowds attempting to illegally enter the sold out Summer Jam concert by climbing over fences and forcing their way through security personnel. The gates have been shut and troopers on site have called for assistance from several nearby stations to help maintain order.Troopers and stadium security officials are insisting that all people outside of the gates depart the MetLife grounds to avoid congestion when the concert lets out. There is no number of arrests available at this time.

Hot 97 have said that anyone with a legitimate ticket who didn't get into the show will get a refund. A report from NBC4 and other video from outside the Summer Jam show, below...