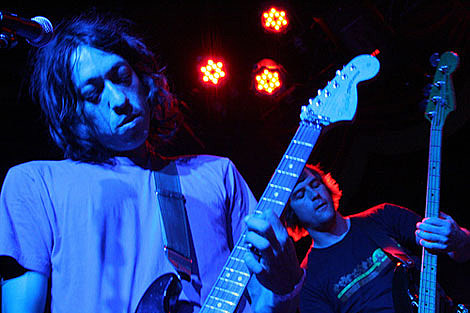 Philly Weekly: During the time Polvo was inactive, did you ever have a sense that the band would someday get back together in some form or for some reason, or did you feel like it was permanently over?
Ash Bowie: I didn't really have a feeling about it one way or the other. We never ruled out playing together again, but I don't think any of us were counting on it. Actually, I thought it was pretty unlikely.

PW: When you talk to fans after shows, are there a couple of questions that keep popping up? What do people generally have to say or want to know when they approach you?
AB: Sometimes people tell us how far they traveled to see us play. Otherwise, just questions about what our plans are and things like that. I've just started to realize how hardcore some of our fans really are. The response so far has been amazing and kind of surreal.

On Friday, July 31st, Polvo played a Seaport Music show that ended up happening at the Brooklyn Bowl (not the only show that got moved to the venue this weekend). Obits opened the Friday show that happened around the time Jay-Z was closing out the first night of All Points West in Jersey City.

And the Polvo reunion continues. They're currently putting the finishing touches on In Prism, their first studio album since 1997's Shapes, set to come out September 8th on Merge (who are also releasing a new album by Lou Barlow soon). "Beggar's Bowl" from that Polvo album is posted above.

The band played the XX Merge festival in July, not long before the Brooklyn Bowl show. On September 24th they will play the the Bell House in Brooklyn. Tickets are on sale.

More tour dates from the band, the In Prism tracklist, with re-posted videos from Friday's show, below...