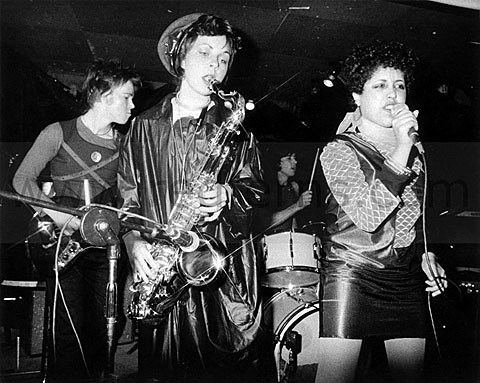 Poly Styrene, best known as the frontwoman with 1970s punk group X-Ray Spex, has died. Styrene was receiving treatment for an advanced form of breast cancer when she passed away yesterday (Monday 25 April). She was 53.

...A spokesperson for Styrene confirmed her death this morning, saying everyone around her was saddened by the news. A full statement is expected later today.

Styrene, who was born Marian Joan Elliott-Said, shot to fame in 1976 with X-Ray Spex, and was immortalised in punk history with the song Oh Bondage, Up Yours! "Little girls should be seen and not heard," Styrene would say to introduce the track. X-Ray Spex released one album, the acclaimed Germ Free Adolescents in 1978, before Styrene left the group.

Despite her relatively short stint with the band, Styrene's overt feminism and mixed-race heritage marked her out among her punk contemporaries and won her legions of fans for generations to come. Beth Ditto, singer with Gossip, said: "Poly Styrene [was] so ahead of her time. She recreated punk." -[The Guardian]

Poly Styrene's new solo LP Generation Indigo is out TODAY (4/26) in the US. Check out her thoughts on each track on the record, as well as a video for a new song and some classic video too, below...

X-Ray Spex - Oh Bondage! Up Yours!