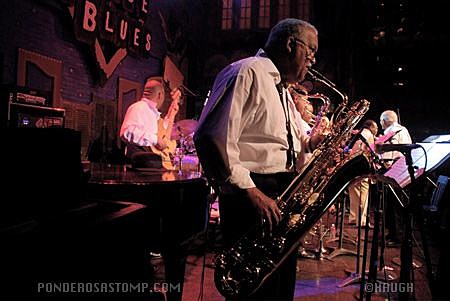 The Stomp is also hosting a set of dates at this year's Lincoln Center Festival 2009, which runs from July 7 through July 26, 2009 (tix on sale Friday 3/13). The Stomp @ Lincoln Center includes The Get Down: Soul/R&B evening on July 16, Best Dance in Town: Rockabilly on July 17 (both part of the Midsummer Night Swing series), and "A Tribute to Wardell Quezergue" on July 19 at the refurbished Alice Tully Hall.

The only date with details so far, "A Tribute to Wardell Quezergue," honors the songwriter and arranger known as the "Creole Beethoven" with a performance of recent Quezergue (pronounced Kuu-zair) arrangements by:

Though it doesn't mention it on the schedule, Eli Paperboy Reed will be performing with Barbara Lynn at the SXSW stomp. Eli is also playing the same SXSW venue two days earlier, and a show at The Bell House in Brooklyn this Thursday night (3/12). He's also playing a lot of other places. All tour dates below.

The Lincoln Center Festival in NYC will also host the North American premiere of a work by Philip Glass, performed by Dennis Russell Davies and Maki Namekawa as part of Two by Four with the Ruhr, four-hand and two-piano works.

Two by Four with the Ruhr, four-hand and two-piano works with Dennis Russell Davies and Maki Namekawa, to include the North American premiere of a work by Philip Glass

Wardell Quezergue emerged as a bandleader in the mid 1950s with his royal Dukes of Rhythm and Wardell and the Sultans. He had honed his skills while serving in the U.S. army, stationed in Japan, where he was responsible for arranging and directing the army orchestra. Much of his career, from the late 50's on was spent arranging and composing material for other artists and record labels, starting with Imperial, Watch, Rip and Frisco. Known among New Orleans musicians, as the "Creole Beethoven," he gradually became the arranger of choice for a wide range of artists, across many musical genres. His arrangements and productions of songs like Professor Longhair's "Big Chief," Robert Parker's "Barefootin,'" Willie Tee's "Teasin' You" and the Dixie Cups' "Iko Iko" helped to define not only New Orleans music, but its culture, as well. Over the years artists who've benefitted from his expertise include Fats Domino, Stevie Wonder, The Pointer Sisters, Paul Simon, Aaron Neville, and Mac Rebennack (Dr. John) to name a few.

In 1964, Quezergue was a co-founder of Nola Records. An early hit on the label was Robert Parker's "Barefootin"; the label went on to amass a huge catalog of soul and R&B recordings until it folded in 1968. "We created songs from scratch," Quezergue later recalled of his '60s apex. "The songs were really what would dictate the sound."

Working out of Jackson, Mississippi, in the early 1970s, he brought its distinct sound into the mix and to the top of the charts. After the success of his own studio productions, "Groove Me" and "Mr. Big Stuff," big labels came calling and an avalanche of Quezergue productions surfaced on labels like Chimneyville, Atlantic and Cotillion, including powerful cuts by Irma Thomas, Tami Lynn, Johnny Adams and the Unemployed (a funk group headed up by Quezergue's sons!). Wardell soon reached back to New Orleans to form his own new imprints, Pelican and Movin,' issuing such funky masterpieces as Curtis Johnson's "Sho 'Nuff The Real Thing" and Chuck Simmons' "Lay It On Me."

From the late 1970s on, Quezergue worked on a variety of projects and was in great demand as an arranger for local New Orleans' bands. He did orchestrations for Ronnie Kole, arrangements for the Dirty Dozen Brass Band and Kermit Ruffins Big Band, and was the music director for the 1984 World's Fair Orchestra. He arranged and produced Dr. John's 1992 Grammy Award-wining recording, Goin' Back to New Orleans. Created over a six-year period, Quezergue's monumental Creole Mass, a large-scale work for symphony orchestra and chorus, spiritual chorale, children's choir, second line brass band, and soloists was completed and recorded in 2000. Although illness has caused him to be almost completely blind, Quezergue continues an active career as an arranger (his son transcribes the arrangements). All of the songs that will be performed on the July 19 concert are new arrangements he has done over the last three years.