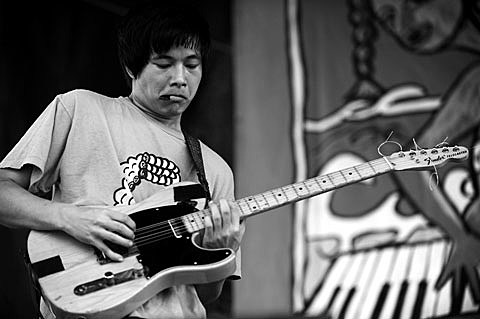 Ponytail's set at Whartscape this past summer may have been their last:

"Everybody is off going about their own endeavors, which is really exciting, I think. Ken's writing his own music and Molly is on a journey to find her self and Jeremy drums for the Boredoms now. I think its really good, and if by chance the scattered happens to gather again, it would be another interesting experiment."
- [Dustin Wong to Bmore Musically Informed]

And now Dustin Wong (guitarist of Ponytail) is doing just that by preparing to release a solo LP, Infinite Love, on Thrill Jockey on 10/5. The two-song 2LP/2CD is the follow-up to Wong's Let It Go cassette, available for download above, or for purchase.

Wong will play a pair of NYC shows in the coming days, starting with TONIGHT (9/16) at Shea Stadium with Dan Friel, James Ferraro, Black Actor, and Gamut. Then two days later (9/18), Wong is on board for the Last Supper Festival at 3rd Ward in Brooklyn alongside a ton of other artists. Full festival details are below.

If you can't make it out to either show, roll the dice and hope for the best, maybe you can get Dustin Wong to play a private show for you:

Dustin Wong will perform a series of a dozen one-on-one concerts for fans and friends via Skype video chat. These "Infi-Net Love" performances will be available to the winners of twelve golden tickets.... Tickets for the "Infi-Net Love" personal concerts will be included in randomly-chosen copies of the Infinite Love album preordered from the Thrill Jockey web-store. A very limited number of tickets will also be available from Bmoremusic.net, Other Music, and more to be announced shortly. The private concerts will be set up with the winners by Thrill Jockey and will take place during the month of December.

For more on that contest, head to the Thrill Jockey site.

Dan Friel, who is playing tonight's show at Shea, also plays a solo show tomorrow (9/17) at St Mary's Church in Brooklyn with Band of Bicycles, Lame Drivers as part of "Bike-In-Movie Night" which will be showing the bicy-classic, Pee-Wee's Big Adventure. Parts & Labor (Dan's band) are scheduled to play in the near future as well; look for them at Glasslands on 10/15 with Shy Child, Bunnies, and Adult Themes.

All tour dates, details on the Last Supper Festival, and some Dustin Wong videos, below....

All of these artists, and MANY MORE are donating there talents and time to make this multi-media festival for emerging artists happen. Please show your support by coming out saturday, September 18th, at 3RD WARD (www.3rdward.com). Proceeds benefit the Food Bank For New York City. For full listing of the entire artist line up (+100 artists of various media & disciplines), please visit www.lambastic.com