DOWNLOAD: Ponytail - Celebrate The Body Electric (It Came From An Angel) (MP3) 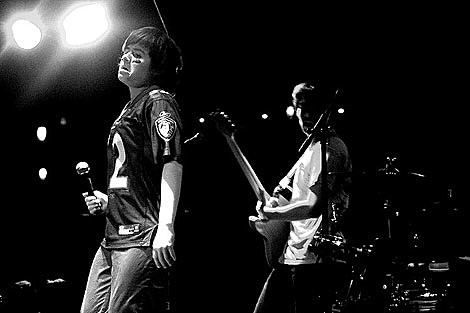 Ponytail, currently touring Europe, will be playing a bunch of shows at SXSW in Austin this year. After that no proper tour has been announced yet, but they do have a scheduled show in Philadelphia in March, one in Spain for the Primavera Sound Festival in May, and an April 25th show at Music Hall of Williamsburg. Tickets for the Brooklyn show are on sale at noon.

Live entertainment is provided by Baltimore spazz-rockers Ponytail, who rip through characteristically energetic versions of "Late for School" and "7 Souls" (both from Ice Cream Spiritual) while surrounded by spinning dryers. We've seen people behaving like the band's mighty vocalist Molly Siegel in a laundromat before, but they're usually just there to keep warm, and more often than not they wind up being wrestled to the ground and forcibly ejected by New York's finest. That's rock'n'roll for you.

Those videos and all tour dates below...