NYC post-punks Pop. 1280 have announced that they will release the followup to 2012's The Horror with a new album, Imps of Perversion, on August 6 via Sacred Bones. On the first single, "Lights Out," they've got way thicker production than on the last album, and it only benefits their sound, which is dark and angry as ever. Stream that track, along with the album artwork and tracklist, below.

Pop. 1280 will be playing a hometown show as part of the Northside Festival, opening for like-minded band The Soft Moon at their previously announced 285 Kent show on Sunday (6/16). Another local band, Grooms, who also play a Exploding In Sound/Gimme Tinnitus show today (6/14), are on the bill too. Tickets for the 285 Kent show are still available.

Pop. 1280 also have another upcoming local show opening for Chrome Cranks at Mercury Lounge on August 16. Twin Guns are on that bill too. Tickets for the show are still on sale.

That new song stream, album art, and tracklist, below... 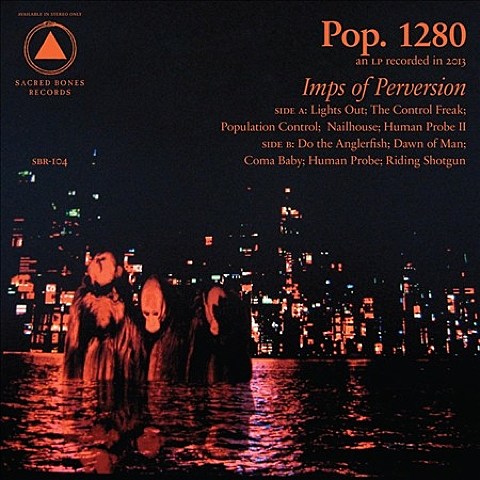