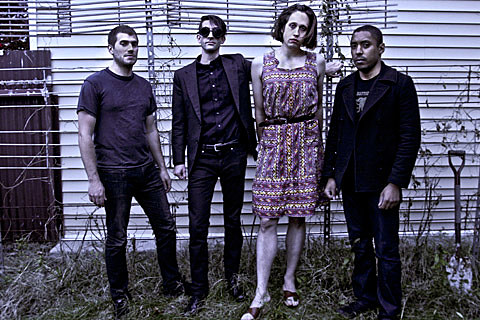 Pop 1280 mine the dark chasms of punk and no-wave on their new LP The Horror, due on Sacred Bones on January 24th. The band previously released the song "Bodies In The Dunes" from that album, and we are now proud to premiere another track today called "New Electronix". Stream both below.

Pop 1280 have THREE NYC shows scheduled for the next couple of months. Most imminently, the band will play Sunday at Music Hall of Williamsburg (1/22) with Pissed Jeans & Protect-U. Tickets are still available. The band will ALSO play a record release show that week at the WIERD party at Home Sweet Home on January 25th with DJs Caleb Braaten (of Sacred Bones) + Glenn Maryansky (of Cult of Youth), more details are available at the Facebook invite. Last but not least, look for Pop 1280 at Saint Vitus on March 3rd with Velvet Condom and Bootblacks. Tickets are on sale.

Speaking of Cult of Youth, vocalist/guitarist Sean Ragon will re-open his record store Heaven Street on Friday (1/20). The opening of the new location (184 Noll St, near Flushing Ave, off the Morgan L) will be accompanied by free beer, and DJ sets from Glenn Maryansky, Sybil Disobedience, Chris Prorock, Ning Nong and Gasface. The grand re-opening kicks off at 4PM and more details are available at the Facebook invite.

All streams and some video is below.

Pop 1280 - Bodies In The Dunes by brooklynvegan