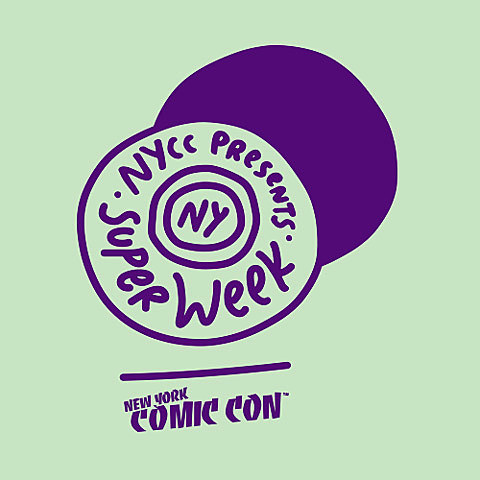 New York Comic Con, a geyser of nerddom people either love with unbridled passion or hate with unbridled passion, will descend its acne ridden buttocks upon the Jacob Javits Center on Manhattan's West Side from October 9 - 12. Discerning nerds and dorks of all stripes will thrill to panel discussions, vendors, signings, cosplay, and more without fear of atomic wedgies or being stuffed in lockers or God help us, a dreaded swirley. And unlike the San Diego Comic Con, which happens next month, the NYC one is actually managable to some extent.

The 2014 Comic Con will be a little different this year as it will be supplemented with a ton of programming leading up to and running concurrent with the event. This splinter programming is called New York Super Week which will happen October 3 - 12.

ReedPOP has partnered with a number of venues, bars, restaurants and retailers throughout the city, including, but not limited to: Hammerstein Ballroom, 92nd Street Y, Rock Bar, The Bell House, Galapagos Art Space and Barcade. New York Super Week will be the ultimate celebration for fans of pop culture. Kicking-off with StarTalk Live! hosted by Dr. Neil deGrasse Tyson at the Hammerstein Ballroom, New York Super Week events will demonstrate the breadth of international, national and local pop culture, ranging from live recordings of Ask Me Another and Slate's Hang Up & Listen podcast, to The Big Quiz Thing, Running Late with Scott Rogowsky featuring the co-creators of Dr. Katz, Story Collider, and eSports competitions.

I am particularly intrigued by SLIMED! Presents a Nickelodeon Nostalgia Nite and Running Late with Scott Rogowsky featuring the co-creators of Dr. Katz. Right now ticket info and full program scheduling is TBA, but I do know you can get the New York Super Week Card to priority seating to all New York Super Week events taking place at such locales as 92Y Kaufmann Concert Hall, Barnes & Noble, and Galapagos Art Space as well as drink specials at venues and bars such as Rock Bar, Barcade, The Bell House, Union Hall, Videology, Duke's, Big Daddy's and The Way Station. Kaboom!

Full list of events thus far announced are below. ...