The Luyas @ Webster Hall in April (more by Sarahana) 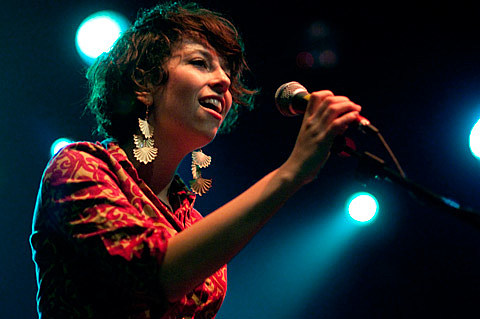 The 2010 edition of the Pop Montreal music festival (Montreal's answer to CMJ and SXSW) kicks off today. Highlights on the schedule include, in the legends department, Swans (who are also touring through NYC), Van Dyke Parks (who is also touring through NYC), and a performance by Mary Margaret Ohara (with an opening set by Doveman). I also discovered a new collaboration on the schedule: Light Fires is the "joint venture of musicians Gentlemen Reg Vermue and Ohbijou's James Bunton." Karkwa just won the Polaris Prize and they'll be playing a showcase too.

In the "our favorite Montreal bands" department, there will be also be sets by hometown favorites Think About Life and The Luyas (not to mention Radio Radio, Parlovr, Braids, etc, etc...).

Speaking of The Luyas, congrats to them!

"We recently fell head over heels for the space-age experimental pop sound of the Luyas, and after a long courtship, some late night long distance phone calls, and at least one senior prom dance, we can now welcome them to the Dead Oceans' family. Hailing from Montreal, the Luyas are Pietro Amato, Mathieu Charbonneau, Stefan Schneider, and Jessie Stein.

It is easy to get lost in the Luyas' musical world-their retro-futurist songs are drenched in echo, and built from guitars, French horn, piles of keyboards, drums and percussion. Singer/guitarist Jessie Stein expands the band's already wide musical vocabulary when she plays the Moodswinger-a 12-string electric zither designed by the Dutch experimental luthier Yuri Landman.

The Luyas are currently working on their forthcoming first album with Dead Oceans, slated for release in early 2011. Working with engineer Jeff McMurrich (Tindersticks, Constantines), The Luyas have also teamed up with friend and colleague Owen Pallett who is lending his arranging skills and violin playing to a number of tracks." [Dead Oceans]

The Luyas will be back in NYC for CMJ later in October.

And speaking of Swans, they kicked off their reunion tour last night at the Troc in Philly. A single video was posted to YouTube. Check it out below...