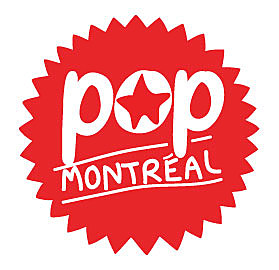 The last few years have seen the festival branch out to other avenues including Film Pop, symposiums on the state of music (with Lydia Lunch and Sister Nancy are a couple of this year's speakers) and Puces Pop, an arts and crafts bazaar. That expansion is going further this year with the announcement of Kids Pop, a series of demonstrations and workshops aimed toward younger Pop Montrealers that will run the entirety of the festival.

Like our CMJ coverage last year, over the next few weeks we'll be highlighting some bands playing the fest that we think might be worth checking out. Also, during the festival, we'll have write ups of the previous days action.

The full Pop Montreal lineup and schedule can be found HERE. A video commercial below...